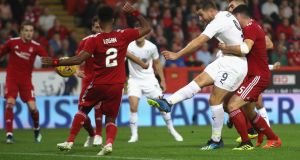 The Dons led through Gary Mackay-Steven’s penalty from the 19th minute and were more than holding their own until Vokes flicked the ball over two defenders’ heads and fired into the roof of the net to make it 1-1 with 10 minutes left.

Finances suggested the game should have been a mismatch – Burnley raked in €135 million for finishing seventh in the Premier League while their hosts collected €2.6 million for a fourth consecutive runners-up spot in Scotland.

But Aberdeen had more than an edge in European experience, not just from their 1980s heyday which saw them win the European Cup Winners’ Cup and Super Cup. The Dons are well used to competing in the summer months in recent years while Burnley were making their return to European competition after a 51-year absence. However, both teams will be well aware of the significance of the away goal.

The visitors suffered an early blow when they lost England goalkeeper Nick Pope to a shoulder injury. His replacement, Anders Lindegaard, was soon picking the ball out of the net after well-placed German referee Daniel Siebert spotted an illegal challenge with the arm by James Tarkowski, which left Sam Cosgrove clutching his face. Mackay-Steven sent the Danish substitute the wrong way from the spot.

Aberdeen were pressed in for much of the rest of the half but they soaked up the pressure and looked purposeful in attack. The half-time situation could have been worse for Sean Dyche’s side but Graeme Shinnie shot weakly at Lindegaard after robbing Ashley Westwood and driving to the edge of the box.

Aberdeen had two players in defence who were making their debuts after missing the whole of last season with knee injuries, but former Hamilton captain Michael Devlin was hugely impressive while former Ireland under-21 international Tommie Hoban just about emerged unscathed from a difficult night against Aaron Lennon after joining on loan from Watford on Wednesday.

They protected Joe Lewis until the 49th minute, when the goalkeeper produced a brilliant point-blank stop from Jack Cork’s diving header before getting a crucial touch to Lennon’s driven cross.

The hosts weathered a brief storm before threatening again. Cosgrove had a shot saved as a break caught Burnley wide open and Mackay-Steven forced a flying save from Lindegaard with a header from eight yards.

Shinnie dropped into a back five after Johann Berg Gudmundsson and substitute Vokes had efforts off target for the visitors and Aberdeen again came close when McGinn fired just wide.

But the tie turned when Vokes brought down a knockdown eight yards out and gave the 2,000 away fans cause for celebration and optimism ahead of next week’s second leg at Turf Moor.

Alfredo Morelos fired Rangers to their first foreign win for a decade as Steven Gerrard’s side claimed a 1-0 win over Osijek.

The under-fire Colombian striker has been singled out for criticism after two sloppy showings in Gers’ opening Europa League qualifier with Macedonians Shkupi.

But the 22-year-old answered his critics in the perfect manner as he grabbed the all-important away goal with his 18th-minute winner in the second qualifying round first leg tie at the City Garden Stadium.

Steven Gerrard’s team had to ride their luck at times but the Light Blues held on for their first away win in Europe since beating Sporting Lisbon on their way to the 2008 Uefa Cup final.

Florian Kamberi capped a memorable night at Easter Road as Hibernian came from two goals down to win 3-2 in stoppage time against Asteras Tripolis.

The striker scored in added time to cap a brilliant second-half fightback from Neil Lennon’s side, whose Europa League hopes looked to be dead and buried at the break.

Georgios Kyriakopoulos scored two goals to leave Hibs facing a premature exit in the second round of qualifying, but an inspired second-half comeback was capped by goals from Efe Ambrose and David Gray to restore parity.

After Triantafyllos Pasalidis had been dismissed for the visitors, Kamberi was on hand at the back post as the clock ticked past 90 minutes to poke in and give the hosts a dramatic win and the upper hand in the tie.

Irish league side Crusaders went down to a 5-1 defeat away to Slovenia side NK Olimpija Ljubljana, with Kingsley Boateng grabbing two goals for the home side.