Redemption at the death as Rovers rescue a draw in Norway 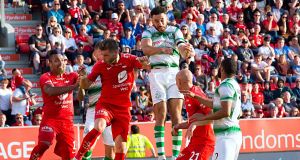 Roberto Lopes found redemption at the death on a humid night in Bergen as Shamrock Rovers twice came from behind to shock SK Brann in their Europa League first qualifying round, first leg.

Central to much of the key action, defender Lopes forced an own goal for Rovers’ first equaliser before conceding a penalty.

But the 27-year-old would then delight the raucous band of 200 or so Rovers fans in the Brann Stadion to pop up with a deserved equaliser deep in stoppage time.

Despite starting positively, Rovers annoyingly fell behind from the first corner of the game on 12 minutes. Ethan Boyle headed away Fredrik Haugen’s delivery. But the ball dropped invitingly for Estonian international Taijo Teniste who chested on to his left foot to strike a crisp left-foot volley that beat Alan Mannus from some 25 yards.

Jack Byrne’s touch and guile was Rovers’ chief foil and he was instrumental in their equalising on 34 minutes. Initially having won the free kick, Byrne curled it into the near post for the run of Lopes.

And though he didn’t quite make it with an attempted diving header, the ball flew off the knee of Amer Ordagic and into the far corner of the net for an own goal.

If Lopes initially claimed the goal, he was suckered into conceding a penalty within two minutes. Nutmegged by Veton Berisha, Lopes took the Norway international down just inside the area. Berisha drilled the spot kick low and hard to the bottom corner.

In an open game, Brann’s uncertainty at the back gave Rovers chances and they were close to levelling again on 38 minutes.

While Byrne’s ball didn’t quite find the run of Boyle, keeper Hakon Opdal and Ruben Kristiansen got themselves into a bit of a mess in attempting to clear.

With Opdal stranded, Aaron Greene pounced on the loose ball to shoot with Kristiansen recovering to make a crucial block.

A howler in the Rovers’ defence then gifted Brann a chance five minutes into the second half.

Lee Grace wasn’t aware that Berisha was behind him as he tried to head Opdal’s long ball back to Mannus.

Perhaps not believing his luck, Berisha failed to capitalise as his poor lob was gathered by Mannus, much to Grace’s relief.

It was Rovers who then failed to make a mistake count on the hour mark. Skipper Ronan Finn, on his club recordbreaking 20th appearance in Europe for Rovers, intercepted a poor pass, worked a one-two with Greene only to be thwarted by a superb tackle from Bismar Acosta.

Greene then broke through on the counter with Teniste tracking him well to make an equally excellent challenge to win the ball. Loan striker Greene then wasted Rovers’ most clearcut chance of the game on 64 minutes.

Brann pressed late on, but could find no further way past Mannus who made a couple of good saves, on both occasions from Haugen. Rovers then struck for their due reward four minutes into added time.

The excellent Byrne floated over a perfect corner. Lopes was there to redeem his earlier penalty concession with a powerful downward header to the bottom corner to the delight of the Hoops faithfully gathered in the corner.