Tom Mohan has lost some key players, such as Troy Parrott, to club commitments 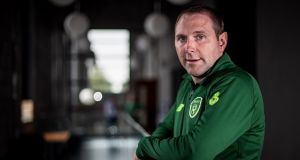 The Republic of Ireland squad for the European Under-19 Championships in Armenia will be confirmed on Thursday as manager Tom Mohan and his players settle into their preparations for Monday’s opening group game against Norway in Yerevan.

Mohan has lost the likes of Tottenham striker Troy Parrott to club commitments as the tournament is to played outside a regular international window and the manager has been negotiating for the release of others pretty much up until the last minute as others, including Will Smallbone at Southampton, were named in travelling parties for preseason tours.

The initial group of Irish players assembled in London a couple of days ago and trained at Loftus Road before flying out, via Kiev, on Wednesday morning.

Amongst those to definitely make the cut is 17-year-old left winger Tyreik Wright who featured in all three Elite phase qualifiers and scored in the 3-1 defeat of Azerbaijan.

“We’re not here to take part,” says the teenager who has made solid progress at Aston Villa since moving to the club from his hometown of Ovens in Cork last year. “We want to go and win it. There are no knockout stages as such; it’s just the groups, semi-finals and finals. And 100 per cent we have enough talent. The lads are excellent. We can’t wait to get started and show what we can do. We’re underdogs but we’re confident.”

Other teams will be wary after the way Ireland came through qualifying, winning all six games, but with just eight finalists, there is little margin for error now and Mohan will be hoping for a strong start before the group games against France and the Czech Republic on Thursday and Sunday respectively.

In the other group, the hosts find themselves having to battle Portugal, Italy and Spain for one of the two available semi-final slots.

“We’ll give 100 per cent no matter who is out there,” says Wright, who is suspended for Monday’s game after picking up two yellow cards in the second round of qualifying. “It’s frustrating but that’s football and you’ve got to get on with it.”

For Wright, who credits much of his progress to date to the coaches who spotted his potential at local club Lakewood and to Colin O’Brien who he went on to play for with Ireland at Under-17 level, including at the Europeans in England last year, the tournament represents another big learning opportunity after a year in which he was quickly bumped up at Villa.

“It was very good. I was playing for the under-18s all season, then I got called up to the under-23s and trained with the first team a few times as well. It (the Under-23 side) was a big step-up, you could get players who were 21 or 22 whereas in 18s you’re against 17 or 18-year-olds. It’s a lot more physical and the game is quicker but I got a lot of experience from it and I’m looking forward to next season.”

In other news, The FAI has renewed its longstanding commercial deal with Toplion, the Irish company behind the New Balance and Umbro brands.

The new deal, which was generally expected, will run for six years from the autumn of 2020. No value has been put on it at this stage but the previous contract was worth a basic €2.5 million per year before performance related bonuses to the association and there has been considerable inflation in the sector since it was originally signed back in 2009.

The term of that deal had been for 10 years from 2010 and the renewal had always been seen as forming a key part of John Delaney’s repeated claims that the association could be debt free by 2020 with the former chief executive having apparently considered doing a deal to realise the value of the contract, less a discount, up front from a third party.

The FAI has described the latest renewal as “a significant vote of confidence as the Association looks to adopt the Governance Review Group report at the AGM on July 27.”

The organisation’s General Manager, Noel Mooney suggested that the deal had come “at a very important time in the history of Irish football.”

Jonathan Courtenay, of JACC Sports/Toplion said that the six-year extension would bring the number of the years the firm has worked with the FAI to 32.

“We look forward to working with the incoming board of the FAI, alongside the commercial and technical departments. We see this as an opportune time to renew our commitment to Irish football and we look forward to embracing the exciting challenges and changing times ahead.”

1 Reality Bites – Tales from the new normal: Caitríona Cormican
2 Matt Williams: We all need a bit of Bud Maher’s resilience right now
3 Nicholas Quinn: ‘Swimming became how I dealt with grief’
4 Ian McKinley: ‘You do take for granted the simple things in life’
5 Karen Robinson Walton: I am looking at him. I say ‘Benjamin, what have we done?’
Real news has value SUBSCRIBE
Crossword Get access to over 6,000 interactive crosswords