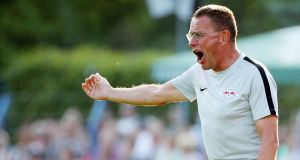 Milan have reached a deal with Ralf Rangnick to become the club’s new manager for the 2020-21 season. The German will replace Stefano Pioli, who has been in charge since October last year.

The 62-year-old Rangnick has already agreed to become the club’s new manager but will also hold discussions with the Milan hierarchy to combine that role with that of sporting director, a position currently held by Paolo Maldini.

Rangnick made his name as a manager of Hoffenheim and RB Leipzig in Germany and has also been sporting director for Leipzig and Red Bull Salzburg. He has been working as head of sport and development at Red Bull since the summer of 2019.

The 62-year-old has been linked with several high-profile jobs in the past year, including Manchester United and Bayern Munich. He has now agreed a deal, expected to be for three years, to take over the Rossoneri after the current season.

Pioli has actually overseen an improvement in results in recent weeks but the club are still in seventh, 29 points behind leaders Juventus, who they meet on Tuesday night, and 17 points adrift of Atalanta in fourth. - Guardian

Golf Majors return with US PGA, Man United progress in Europe
Here is your handy guide to sport on television this week