Will Erling Haaland fit in with Guardiola’s magnificent obsession?

Dortmund’s star striker would transform City, but Pep may prefer a player he can mould 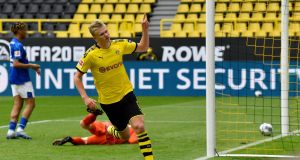 Dortmund’s Erling Haaland celebrates after scoring against Schalke 04 in the German Bundesliga on May 16th. Photograph: Martin Meissner/Pool/EPA

We had it pretty good for a while back there but, as things stand, the stream of behind-the-scenes Pep Guardiola books really does seem to have run dry. For a few glorious years they just kept coming. Pep: Undressed. Inside Pep. Deeper Inside Pep. Inside Pep 3: So Deep it’s Possible to Feel the Wall of His Large Intestine.

It is an addictive genre, with some highly informed writing and glimpses of the cutting edge of the modern game, but with the Pep Unpeeled stuff you know what you’re really coming for. It’s not the game-by-game or the tactical insights. It’s the obsession stuff.

What I really want to hear is that on matchdays Guardiola eats only wood chippings and his own toenails. That he ran to Scarborough and back in a pair of blood-soaked espadrilles in order to process the pain of losing at Leicester. That he was physically sick the first time he saw Kyle Walker take a short corner in training and had to take a week in Belgium with Banksy and Stephen Hawking rewiring the left side of his brain.

This is not to mock Pep’s magnificent obsession. Quite the opposite. Pep being mad about football is uplifting. It breathes life into the whole garish circus. Never changing, never taking a step from the light, on the touchline waving his fists at the sky. Pep must always be building a team to his own uncompromising blueprint, or the world becomes a slightly colder place.

This is the jarring thing about Manchester City’s progress this season. City are in a time of transition. They’re still only a minor surge off the top of the table but there has been, of all things, a mildness. This City are more pragmatic, no longer wedded to some notion of through-the-roof genius-ball. They played a deep midfield shield at Old Trafford and took a point with a shrug.

There is nothing surprising in this. Guardiola is doing something new, trying to build a second champion team. Sometimes you just can’t be transcendent.

With this in mind the talk – back again this week – that City may be in for Borussia Dortmund’s Erling Braut Haaland is fascinating for reasons that go to the heart of the manager’s arc and the City project itself.

First thing: this is, of course, just agent chatter, a long-form bluff directed at a tier of elite clubs. There has been some suggestion this week City wouldn’t make a bid owing to financial fair play restrictions – incorrect, in my opinion. Those rules were due to be relaxed. Fifa are bruised from the last tussle. And football would probably welcome a little quantitative easing.

The really striking part is Haaland himself. There are always prodigies and hot new talents. And there’s this, a 20-year-old whose attributes are startlingly complete. In the most obvious terms, Haaland is that rare thing, an out-of-scale athlete: a small man’s agility and acceleration – he has an incredible 30m sprint – wrapped inside a large man’s strength and reach.

So often with young players the fear is about how they may cope with this new world. The question with Haaland is: how will the world cope with him?

Plus he has all the other stuff: high-grade touch, tactical brains and a basic joy in his own goal-a-game ruthlessness – all of this already stress-tested through the glare of elite European club football.

This is what we know about Haaland. He works. He’s a lock. He looks like one of those pre-cooked players – such as Michael Owen or Wayne Rooney – who aged 20 are as good as they ever will be, a magic sweet spot of adult capacities and youthful clarity, the absence of scars, physical or mental.

So often with young players the fear is about next steps, about how they may cope with this new world. The question with Haaland is: how will the world cope with him?

All of which brings us back to Guardiola, still the main reason Haaland would actually go to City – and yet this would not be a classic Pep move. For all the money spent, the sense of some cosseted super-manager, the most interesting thing about Guardiola is his refusal to simply buy ready-made world stars.

Instead, his key skill has been improving very good players: Pep the obsessive, the man who painted a chalk spot for Raheem Sterling to stand on during training games. It is this desire to coach and build a team that has made the City project a piece of art rather than simply a machine for winning. Pep’s creative vanity is often the best part of this.

How much more boring if he simply spends the gas money on a galactico centre-half and left-back, rather than fiddling about bending in-between parts into fussicky new shapes. Bad recruitment has played a worthy part too. For all the churn, City’s best buys are still Yaya Touré, Sergio Agüero, David Silva and the artist formerly known as Chelsea Flop Kevin De Bruyne.

And now this. What would it mean to go out and buy Haaland: a €140 million sure thing, and the most desirable bolt-on win guarantee in world football?

Haaland would upgrade every part of City’s game, from the vagueness in attack to a more muscular, Germanic-flavoured version of that high-pressing style.

There is some talk of the need for a wider refresh at a club that have spent almost a decade building everything around the Barça Mk 1 model. In a break with the usual Pep model, Haaland may be a player who could teach the coach a thing or two.