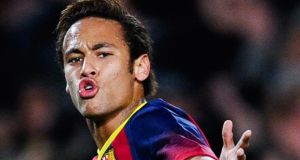 Neymar: Barcelona’s marquee signing in the summer is struggling to find his form after controversy over his multi-million euro move from Santos.

On Sunday, Barcelona will play Real Madrid at the Bernabéu stadium. Clásicos tend to define a season in Spanish football, this year’s encounters more than ever.

Much has changed since Barça overran their rivals 2-1 back in October at the Camp Nou. Going into the game, the focus had been on Real Madrid’s Gareth Bale, the world’s most expensive player, who started the game, by presidential decree it seemed, despite being unfit. He was played out of position as a centre forward, and endured a lamentable afternoon before being substituted.

Meanwhile, Barça’s marquee signing from the summer, Neymar Jr – who was enlisted to try and revive the club after its dispiriting 7-0 capitulation to Bayern Munich in last season’s Champions League semi finals – marked his derby debut with a goal. And while the club’s talisman Lionel Messi sat out the next couple of months nursing a hamstring injury, the Brazilian grew in stature, notably with an impressive performance in the Champions League at Celtic Park.

He has, however, scored only one goal in 2014, during which time Real Madrid have outscored Barça by 10 points in the league. Earlier this week, his manager Tata Martino was pressed about his dip in form. Was it to do with an ankle injury suffered while playing against Atlético Madrid in January or “the problems with his transfer”? Martino admitted it was more likely related to “non-sporting issues”.

In Spain, people refer to it as “the Neymar case”. It has all the hallmarks of the kind of saga that brings down governments. It has engulfed FC Barcelona since it blew up in January, following the resignation of club president Sandro Rosell because of a “simulated contract”.

Members club
Barcelona is run as a members’ club. It elects its presidents. Last December, a club member, Jordi Cases, who works as a pharmacist in a Catalan town about 20 minutes from Barcelona, brought a case against the club for misappropriation of funds regarding Neymar’s signature.

In mid January, Rosell appeared in court, insisting that Neymar cost €57.1 million. Two days later he resigned. The following day, the club admitted that Neymar cost €86.2 million, and followed up by paying out €13.5 million as a pre-emptive strike against tax fraud.

In an interesting sideshow, Barça fans blamed Real Madrid for some diabolical interference. When Neymar signed for Barça, it was seen as “a stain on Florentino’s suit”, as Real Madrid’s president Florentino Pérez, who put in a counter bid, was unable to persuade Neymar to join his club.

Xavier Bosch, a Catalan journalist, claimed on radio that Pérez phoned former Spanish president, and Real Madrid club member, Jose Maria Aznar, to ensure that Cases’ case got a hearing. “That’s what an important judicial figure in Barcelona is saying,” he said. He subsequently apologised for his statement, following threat of a legal action by Pérez.

Meanwhile, Rosell is being investigated for his “negotiating engineering”. Neymar’s father has also come under fire. Questions are being asked about the €4 million which has been allotted to him for a marketing role he is supposed to carry out for Barça. The accusations have brought considerable distress to the 22-year-old Neymar, who posted a despairing message last month on Instagram: “I can’t stand all this nonsense about my transfer.”

His manager, Martino, is also straining from the pressure. He was brought in during the summer as a quick fix, when it emerged that Tito Villanova, who led Barça to a 100-point league-winning campaign, was resigning because of a reoccurrence of cancer.

Martino has been vilified by Barcelona’s sports-based press, which includes two daily newspapers, Sport and Mundo Deportivo . He has been criticised for tinkering with the tiki-taka tactics book – for mixing up his team’s keep-ball play with an emphasis on counter-attacking and long, diagonal balls. Earlier in the season, Barça ceded more than 50 per cent of the ball to Rayo Vallecano in a league game, the first time they had failed to dominate possession in a match since 2008.

Switches in strategy
He has been accused of confusing his players with ad hoc switches in strategy and personnel, and has failed to figure out the great conundrum of Europe’s superclub managers – how to rotate star players when they all want to play.

Much of the witch-hunt is being fed by whispers from his dressingroom. A few weeks ago, television cameras honed in on a surly-looking Xavi Hernández towards the end of a 3-1 defeat to Real Sociedad in the league. The pass master stood on the sideline in an orange bib, as an unused substitute, his face etched in disgust.

It has been reported in the Spanish press that Martino will leave the club, likely taking up the chance to take over as Argentina’s national team coach after the World Cup. The Barcelona board’s silence on the rumours of his departure has been deafening. There has been no declaration of allegiance. His team travel to Madrid on Sunday with their hopes pinned on Messi, who last weekend became Barça’s all-time top scorer with 371 goals.

His nemesis, Ballon d’Or winner Cristiano Ronaldo, is in imperious mood, too, having bagged 41 goals in 37 games this season, and, significantly, he’s part of a side that hasn’t lost in 31 games. Another likely win against Barça will put them seven points clear of the Catalans, and well on the way to a 33rd league title.

1 TV View: Roy Keane but Daragh’s keener as Late Late fails to shoot the lights out
2 Solskjær backs Martial to get 20 goals for Manchester United for first time
3 Ireland Slam England at the Gardens to open up Grand ambitions
4 McIlroy produces strong finish to stay in sight of DeChambeau
5 Six Nations: Ireland v England all you need to know guide
Real news has value SUBSCRIBE
Crossword Get access to over 6,000 interactive crosswords