Time for France to deliver on their ample potential

Argentina have been distinctly underwhelming – but they still have Lionel Messi 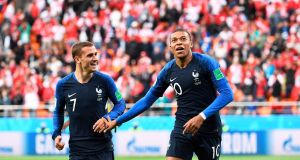 Like Joachim Löw, Didier Deschamps came to Russia having to hope that his side would gel over the course of group stages then, hey presto, pull a rabbit from their hat in the knockout rounds.

Like the viewers back in Paris, we are still waiting for the magic to happen but it has, at least, gone better for France than it did for Germany so far.

Considered decent outside bets for the title here, Deschamps and his players didn’t exactly light up the last couple of weeks but, having topped their group and remained unbeaten, they have taken an important first step towards the final without any real sign of faltering.

French fans continue to hope that their coach can find a way of maximising the huge attacking talents within the team but they have managed just three goals to date, fewer than any other group winners and so their success so far, such as it is, has largely been built on a recently assembled back four.

None of the four is old enough to really remember when their coach lifted the trophy as captain of the 1998-title winning side.

Neither of the full-backs, Benjamin Pavard and Lucas Hernández, had kicked a ball competitively for the senior team before the tournament got under way and only one of the four, Samuel Umtiti, is a survivor from the side that lost the Euro 2016 final to Portugal in Paris two summers ago.

Raphaël Varane, now in his fourth year of captaining the side despite being just 25, missed that tournament, where Umtiti effectively got his place through injury.

Since then, though, the pair, who, like Spain’s Gerard Piqué and Sergio Ramos, are split between arch rivals Barcelona and Real Madrid in Spain, have formed a very important partnership.

Like the Spaniards, they complement each other well, with Varane, a successful student at school who famously asked Zinedine Zidane to call back when he first phoned to recruit him for Real Madrid as he had an exam the next day, the more cultured footballer who gets things moving calmly out of the defence and Umtiti, a year younger than him, the somewhat tougher tackler who reads the game well, snuffs out danger but takes fewer risks.

In front, sit Paul Pogba and N’Golo Kanté, as effective a shield as you could ask for on their day; behind them Hugo Lloris, their hugely experienced captain and goalkeeper.

Either side of the central defenders , though, are Hernandez and Pavard, both just 22, and it says something both about Deschamps and how he viewed his options that the pair started both of the side’s group wins and both are expected to feature against Argentina.

Each is coming off the back of a big – breakthrough even – season at club level; Hernandez at Atletico, where he can play at centre-half or left back but did really well in the latter role after an injury to Filipe Luis allowed him an extended run and Pavard in Germany with Stuttgart where, having moved about quite a bit himself during a promotion-winning campaign, he has settled very solidly into central defence.

A regular at right back for France, he struggled to establish himself just a couple of years back at Lille but has now displaced Marseille’s solid if not spectacular Djibril Sidibé since making his debut against Wales last November.

Hernandez, meanwhile, only made the step up in March when he came on against Russia but he has kept his place despite the return from long-term injury of Benjamin Mendy.

The left back position was seen to be a weakness that opponents would look to exploit when the Manchester City star played there but his slightly younger replacement has done well, looking strong in defence and providing attacking width despite the fact that the constant chopping and changing immediately in front of him cannot have done much to help him settle.

Hernandez, though, is about to face his toughest challenge in a France shirt with the the newcomer, whose brother Theo plays for Real, likely to shoulder a sizeable portion of the responsibility for defending against Lionel Messi on Saturday evening in Kazan. His pace will certainly help but the fear must be that the Argentine star will capitalise on inexperience.

Messi looked more menacing against Nigeria on Tuesday with the inclusion in Argentina’s starting line-up of Ever Banega allowing the team’s greatest star to focus more exclusively on sparkling himself, something he did very brightly while scoring one of the goals of the tournament so far.

Starting out on the right, he drifted inside and towards the area and his movement will again be an issue for France with Pogba, Kanté and the two centre backs all likely to have to play their part in subduing him. If they pull it off, then France may well have the platform the secure another narrow win; more if the attacking side of things takes off.

The South Americans looked poor before the Nigeria game but Umtiti is still acutely aware of the challenge in store if Messi is on form again although the 24-year-old suggested on Thursday that his Barcelona team-mate is probably required to carry too heavy a load when playing for his country.

“He’s different when he is with Argentina compared to Barcelona,” said the defender. “He doesn’t have the same players around him and their way of playing is very different. He has had to save them on several occasions.

“The Argentines are hard on him, they expect a lot, but he can’t do it all on his own.” That said, he continues: “I see him everyday and know how hard it is to stop him. He’s got really great qualities. We will have to work very hard to keep him quiet but then he’s not the only one in this Argentina team, they have other strikers.”

None, to be fair, has actually made much of an impact on this competition so far with Sergio Aguero scoring against Iceland before being replaced during the defeat by Croatia. Gonzalo Higuain kept him out for the final group game but did little and may make way again here.

Messi might well have to be the difference if Argentina are to progress because, let’s face it, Marcos Rojo probably can’t be relied to rescue them again. Failing that they will most likely have to be collectively much better again.

If the French defensive foundation remains solid, though, then this might be the night that Pogba, Antoine Griezmann and Kylian Mbabapé actually start to motor and if that happens they could, unlike the departed champions, be very hard to stop this side of Moscow.

It had better happen soon, though, because Deschamps’ side are going to have to more than defend well if they hope to win this title. The time to gel has arrived.

1 Solskjær praises Martial for building himself into ‘powerhouse’ centre forward
2 Max Verstappen stuns Lewis Hamilton to take Silverstone GP
3 No final round heroics for Rory McIlroy at US PGA
4 Supersub Ronan Kennedy dashes London’s hopes
5 Rory McIlroy puts integrity ahead of glory in US PGA second round
Real news has value SUBSCRIBE
Crossword Get access to over 6,000 interactive crosswords