Kylian Mbappe stars as France dump Argentina out in thriller 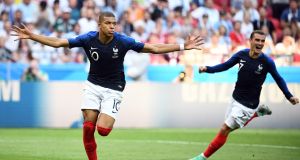 France forward Kylian Mbappe celebrates with team-mate Antoine Griezmann after scoring their fourth goal in the round of 16 World Cup clash against Argentina at the Kazan Arena. Photograph: Franck Fife/AFP/Getty Images

If Argentina paid much attention to France’s pre-tournament friendlies they might be forgiven if they made the mistake of discounting the way Kylian Mbappé had shone at the Stade de France on May 28th; it was after all, only Ireland.

Here, though, a team that came into this game still retaining hopes of winning the World Cup got much the same treatment from the spectacularly talented teenager. Mbappé lit up this encounter with his moments of brilliance. Lionel Messi, on the other, simply couldn’t exert the huge influence that was required of him given the shortcomings of the rest of his side.

After the final whistle, the Barcelona star sought out the youngster to shake his hand. He then stood alone for a while just outside the centre circle watching reruns of the goals that had decided the outcome on one of the stadium’s big screens. Even then, perhaps, he was finding it hard to absorb the fact that it was not him up there making the critical difference but despite his goal against Nigeria, he has been made to look mortal at this World Cup.

If his side’s defeat will inevitably be written up as being about one man and his all but extinguished hopes of adding a world title to his many other honours, the French victory did have more of a collective element to it with Didier Deschamps and his players successfully addressing quite a few of the reservations that have been expressed about them over recent weeks and months.

The goals conceded meant that they had come come from 2-1 behind, but having done that to lead 4-2, they held what they had rather well. The inexperience in the team told at times with Antoine Griezmann having, at one point, before Argentina pulled a goal back through Sergio Agüero, having to order 22-year-old left back Lucas Hernandez to stop advancing down the flank. The likes of Paul Pogba and N’Golo Kanté had enough of a handle on things, though, to see the European side through to the end.

From the outset, the French had sought to keep their opponents on their toes by repeatedly changing the shape of their attack, although nothing and nobody unnerved them, even then, quite as much as Mbappé and such was the pace of the 19-year-old’s runs early on that it didn’t matter seem to matter where they started.

His first intervention of note here effectively handed his side the lead with three Argentines left for dead by the time Marcos Rojo resorted to hauling him down, a process that started outside the area but wasn’t eventually completed until both men were well inside.

Griezmann converted the penalty and would have had another to make it 2-0 if Nicolas Tagliafico hadn’t been a bit more clinical about the trip that stopped Mbappé just outside the box a few minutes later.

The latter run had been sparked by a brilliantly improvised long free by Pogba at a time when the French seemed to be finding the sort of dominant rhythm which had eluded them in the game so far. Griezmann looked menacing whether in the centre behind Olivier Giroud or floating out to the right when Mbappé adopted the second striker’s role and the defence was dealing pretty well with what little the South Americans were throwing at them, most of it from set pieces.

It didn’t last, though. Gradually the twice champions started to get into the game, the French seemed to forget for a while about the pacey ace up their sleeves and things became a lot more even.

Both sides caused the other problems down the right but both also struggled to carve out clear-cut chances inside the area. After a while, Angel Di Maria seemed to decide a different approach was required and when Tagliafico fed the ball short to him inside he took a touch then let fly with an almost perfect strike that gave Hugo Lloris no chance.

When Argentina made it two, excitement levels inside the stadium, which was filled for the most part by their fans, soared. Ever Banega’s free was dealt with rather poorly by Pogba and Messi’s shot on the turn was guided home from close range by Gabriel Mercado.

The tide turned decisively against Jorge Sampaoli’s side from that point on, though. Young right back Benjamin Pavard pulled the French level against with a stunning drive from distance and Mbappé then reappeared to further exploit their general lack of defensive pace, a problem was became more acute when they trailed again, and wrap things up.

Hernandez provided the cross that ultimately led to the third but Franco Armani should really have saved the shot. There was nothing the goalkeeper or, it seemed, anyone else could do about the fourth, 22 minutes from time however. The 1998 champions played the ball quite brilliantly out from the back with Pogba and Blaise Matuidi both producing fine first-time passes before Griezmann released Mbappé into wide open space and he picked his spot to perfection.

That all but ensured the quarter-final spot and though there is a long way to go still for this French team, it is far easier to envisage them making an enduring impression on the tournament after this. For Argentina, it is over. Messi simply couldn’t save them. A few weeks ago, a great many more people would have found that simply impossible to believe.

1 Worst sporting moment: White knuckle ride on a hate-filled night at Windsor
2 Worst Sporting Moment: Mighty Nijinsky misses moment of triumph
3 Rugby to return in England with rucking but no hugging
4 Acute disillusionment the only response to growing FAI debacle
5 Irish roots with the bit of Jo’burg dog: Curtis Campher has arrived
Real news has value SUBSCRIBE
Crossword Get access to over 6,000 interactive crosswords