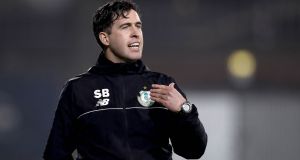 Stephen Bradley: brings his Shamrock Rovers side to Oriel Park for their opening league game of the season. Photograph: Ryan Byrne/Inpho

Dundalk midfielder Stephen O’Donnell laughs as he ponders the idea that Shamrock Rovers visiting Oriel Park for the opening game of the season is somehow the product of random selection but few people are complaining.

Rovers manager Stephen Bradley says he welcomes the early opportunity to test his much-changed side against the champions.

And Stephen Kenny’s side are fully aware their quest for a fourth successive title starts with a stiff opening hurdle.

“It’s all very well saying we’ll have the hunger but you won’t really know until the chips are down and you’re in a bit of a fix,” says O’Donnell.

“Personally, I don’t see it being a problem and on that front the turnover of players might actually help but I don’t think any of us will find out for sure until we’re in a sticky situation.”

Dundalk manager Stephen Kenny has his fair share of short-term problems going into this game with Chris Shields, Gary Rogers, David McMillan and Seán Hoare all set to be watching from the stands while Ciarán Kilduff faces a fitness test on the leg injury sustained in Cork last week.

Of their President’s Cup line up, Cork City have a slight doubt about Steven Beattie as they head to Finn Harps for their opener while the home side could be without Gareth Harkin and Seán Houston.

But Paddy McCourt is amongst those who could make their debut in a home side that manager Ollie Horgan will hope has a bit more attacking bite to it this season.

Bray Wanderers have doubts about Darragh Noone and Conor Earley as they head to Inchicore but Drogheda United manager Pete Mahon will be without Seán Brennan or Ryan McEvoy for the game in Galway. He must also wait to check on Marc Griffin and Mark Doyle.

Bohemians, meanwhile, will be without Eoin Wearen for the bulk of the season while there is talk ahead of tonight’s home game against Derry that Ismahil Akinade could be set for another spell on the sidelines too.