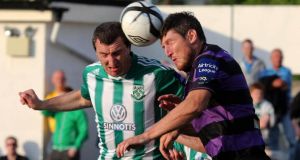 Shamrock Rovers missed out on the chance of moving into fourth place in the Premier Division when held to a scoreless draw by a battling Bray Wanderers at the Carlisle Grounds last night.

Remarkably it was Rovers 10th draw in 19 league games this season while for Bray it was a restoration of pride after losing 7-0 to the same opponents when they last met at Tallaght Stadium in April.

Rovers, without new signing Eamon Zayed, as his international clearance had not come through, almost grabbed the lead on 12 minutes when a Stephen Finn cross from the right was headed by Gary McCabe straight at goalkeeper Darren Quigley.

Then a long throw by Sean O’Connor on the right was headed just wide of the upright by Stephen Rice as Rovers dominated the early stages.

Bray almost took the lead on 27 minutes when impressive winger Marty Waters muscled past Derek Foran only to see his shot from 15 yards pushed out by Richard Brush.

Rovers went close to an opener early in the second half when a James Chambers shot was blocked by Bray defender Danny O’Connor. From the rebound, Sean O’Connor’s effort was just over the bar from the edge of the box.

Rovers did have the ball in the net in added time when Ken Oman headed home but the goal was disallowed for pushing by assistant referee Emmet Dynan.