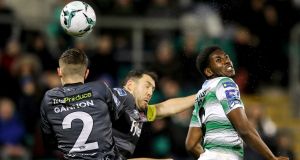 Nobody could accuse either side of settling here but then neither team could complain too much about having drawn a blank in what turned out to be a rare scoreless draw between the two clubs.

The home side sought to dictate things against opponents who have generally had the measure of them in recent times. Still looking as if they were stuck in derby mode, though, Stephen Bradley’s side could do no more than hold their own against the champions.

The Dubliners reckoned they had a half-decent claim for a penalty midway through the second half and Dundalk looked to have a better one right at its end. In the absence of the referee getting involved, though, the two teams struggled on the striking front.

Dundalk created the better of the night’s few chances, most of them in the first half, but in a match that boiled down first and foremost to a midfield battle, there wasn’t an awful lot to get excited about.

Rovers might have had more of the ball in the first half but with the visitors working hard to close them down deep inside their own half they struggled to make much of their possession. An early break yielded a shooting chance that Orhan Vojic probably should have made more of but the Dubliners spent the bulk of their time pushing the ball about between defence and midfield; as nicely as they did it at times, it rarely looked to be causing much concern for the visitors.

Vojic looked a lonely figure up front by himself and though Greg Bolger made an occasional attempt to give the Austrian something to chase down, the midfielder never quite seemed to get the weight on one of his 40-yard balls right.

Dundalk’s approach meant there was little need for that sort of thing. Camped well inside the opposition half for long stretches, they fed off forced errors and intercepted passes but made a habit of giving the ball back a little too easily in a game that was tight and fiercely contested but never quite flowed the way either side would have hoped.

On one side Daniel Kelly looked lively but too often seemed to overstretch himself while on the Michael Duffy was a persistent concern for stand-in right back Roberto Lopes. Sean Murray, showing no signs of the injury that had supposedly made him a doubt for the game, was the most creative player in between for the visitors but their three standout chances of the opening period all came from set pieces with Sean Hoare heading off the crossbar, Kelly firing low and Pat Hoban, just before the break, heading just over.

The locals needed to find another gear and seemed to in the second half. A greater sense of urgency helped them to shunt the game further up the field while Dan Carr, on for Vojic, got about the place a bit more, offering the home side’s midfielders a more obvious attacking outlet, one who then had some chance of bringing team mates into the attack.

About the closest it all came to yielding a goal, though, was when Chris Shields, under pressure, played an ill-judged cross field ball and Trevor Clarke suddenly found himself with the opportunity to tear forward then hit a low shot that finally forced Gary Rogers into a half decent save. That, and the two penalty claims.