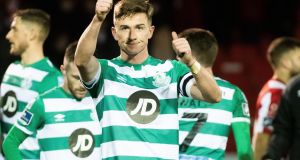 Ronan Finn reckons Shamrock Rovers are in a good position to pick up where they left off before the corconavirus shutdown but insists that the league leaders must focus on beating Finn Harps in Tallaght before worrying about the more obvious challenges to come over the next couple of months.

“Look, it’s a cliché but we can’t look too far ahead because we’re not good enough to do that, we have to treat every other team with the same amount of respect,” says the 32-year-old.

“There isn’t a team in this league that isn’t capable of taking points off you if you take your eye off the ball; they are all capable of punishing you so we have to maintain our consistency. Clubs will drop points, that’s just the way it is over the course of a season but we have to be in a position to be ready for every game.

“But it’s a very professional group. The group that we had last year was very strong and then we added to it so the quality is definitely there and the hunger is there. You see it in training, you see the appetite and the manager would be pulling us up if he smelled that things weren’t right but that hasn’t been the case.

“In the friendlies that we’ve had, the technology is there so you see the stats and the stats have been good; they all suggest that we are in the same position that we were. It will be different now playing with no crowds, factors like that may all start to come into it but we just have to concentrate on doing our job on the pitch. It’s 11 players v 11, nothing has changed in that respect.”

The Dublin club have a three-point advantage over rivals Dundalk ahead of Friday’s games but, says Finn: “We can’t look at the three points, we just have to look at this as a fresh start.”

Rovers head into the Harps game on Saturday afternoon without Greg Bolger, who could miss the rest of the season after having been injured in a recent friendly, and Seán Kavanagh who suffered a setback in training and seems to be another week or two away from a return but Graham Burke is said to be available after having recovered from a relatively minor ankle problem.

Harps strengthend their squad on Friday with the addition of Stephen Folan for the rest of the season.

Folan joins after spell at South Melbourne in Australia and will make his debut against Shamrock Rovers, subject to international clearance.

Ian Morris, meanwhile, says he has a full squad to choose from as Shelbourne take on Waterford in the day’s earlier game. “Everyone is in a good place,” he says, “fully fit with all the players in full training which is brilliant.”

On Sunday, Cork City welcome Bohemians to Turner’s Cross and will do so with strikers Kit Elliott and Scott Fenwick in their squad, subject to international clearance.

Elliott joins on loan from English Championship side Huddersfield, with Fenwick arriving after a recent spell at Blyth Spartans in the National League.