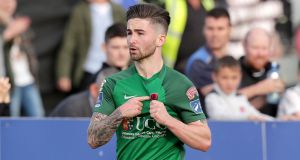 Things can change quickly in football and the news, so soon after Sean Maguire’s move to Preston had been confirmed at the weekend, that Simon Grayson is being linked with the vacant Sunderland job, will have caused concern amongst the entire Irish contingent at Deepdale.

Grayson has clearly been good to and for the Irish at his current club. While it would be interesting to see the extent to which he might renew the connection at the Stadium of Light, in the event that he was handed the task of overseeing the extensive rebuilding job to be done there, the likes of Maguire, Daryl Horgan and Andy Boyle will doubtless be anxious that he stays put. So too Cork fullback Kevin O’Connor, who is set to follow Maguire across the Irish sea.

As things stand, Maguire’s move looks good for all sides; well, maybe not for Cork, with the fee involved hardly reflecting his actual value to the club, but the 23 year-old will be keen to have the man who signed him still running the show when he arrives at the end of July.

From the player’s point of view, Grayson’s willingness to hand first team opportunities to the players he has previously brought in from the league here, augurs well for his own hopes of making a breakthrough. And there appears to be an opening up front. The club was solid rather than spectacular last season in attack with 64 goals scored, and neither of the club’s main attackers did so well as to be entirely secure. Jordan Hugill and Callum Robinson getting 12 and 10 respectively with each having started more than 30 games and featured in more than 40.

Maguire’s rather joyous confidence that he can add something to that mix shone through in the interview he did with the club website over the weekend with the striker describing himself as “a poacher,” and “a grafter,” and, essentially, someone who will “bring goals”. After the start to the season he has made here it is not hard to understand his confidence.

Whatever their concerns about the standard of the league here, Preston fans are bound to be impressed when they check Maguire out and see his hat-trick against Dundalk last weekend.

His record of 34 league goals in 47 games for Cork marks him out as having been on course, ever so briefly, to going down as one of the Irish club game’s great strikers but within that there has been something of a transformation, with the player having improved dramatically in the time since he went to Oriel Park last season and found himself struggling to get a look in as Brian Gartland and Andy Boyle completely dominated him.

He spoke subsequently about the fact that he needed to improve certain aspects of his game, particularly in terms of his physicality, and the work he did in close season addressed shortcomings. The rewards he has reaped have been obvious.

If he retains that sort of hunger, then Preston looks the perfect move. He has spoken with delight about the fact that he knows several of the Irish players there already and the quality of competition should further improve him.

Martin O’Neill has talked almost endlessly about his desire to see a natural goalscorer emerge as a contender for Ireland, and there was enough in his observations last Saturday to suggest that he is open to Maguire starting to establish himself sooner rather than later as long as he can prove himself against Championship defenders.

For City, where John Caulfield’s belief in the player did so much to kick-start his career, the midseason departure will come as a disappointment, especially if they can get through the first couple of rounds in Europe. But they can have no complaints; the league is all but won - Declan O’Brien’s assertion on Soccer Republic that Dundalk now need John Caulfield’s side to have a “serious wobble,” being an early contender for understatement of the year - and the fee is not all that unreasonable given the inevitably of his departure when the player signed a new one-year deal last December.

For Dundalk, the fact that his potential was missed when he was at the club must compound their current frustration somewhat but Stephen Kenny will surely be glad to see the striker go. Both clubs are set to strengthen in the summer window and it will be interesting to see how much more the league champions might look to do in the market to close the gap that has suddenly opened up between the two sides.

Supporters of both clubs, meanwhile, are likely to root for Maguire as he starts the next stage of career in England with his success, like that of Horgan and Boyle before him, having the potential to impact upon the financial model of the league back at home over the years ahead.

There are risks involved, with clubs only really likely to get the full benefit of the players they help to produce if they are singed on significantly longer deals, but we are seeing the first signs of that and the reported interest of English sides in a number of other players here will help to fuel the confidence required.

In the meantime, Maguire will be acutely aware that there are no guarantees. He has suffered disappointments at West Ham before as well as at Dundalk, he will have seen how the manager who signed Richie Towell for Brighton then decided he was not good enough to play in the team and how a player like Cyrus Christie, despite his obvious quality, can find himself on the sidelines after a long spell in the starting line-up because a new manager comes in and favours a different style.

Maguire must shape his own fate for the most part, of course, but he will doubtless be hoping that Grayson goes nowhere.