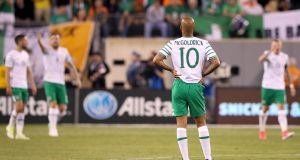 Ipswich Town striker David McGoldrick has been ruled out of Sunday’s World Cup qualifier against Austria.

McGoldrick was Martin O’Neill’s only injury concern as the Ireland squad resumed training at Abbotstown on Tuesday morning. The 29 year-old has been struggling with a knee injury and the manager had said that while the results of a scan on the injury are not conclusive, he was a major doubt.

Later on Tuesday the FAI confirmed that McGoldrick had been ruled out of the fixture.

“David has had a niggle behind his knee which has come on a little bit,” said the manager on Tuesday afternoon. “It is niggly and we are a bit concerned about it. So far, everybody else is not too bad at the moment, but obviously we have (more) training sessions to negotiate.”

O’Neill played down the notion that, based on his side’s start to this campaign and Austria’s current problems in relation to a couple of key positions, Ireland go into the game as favourites to win although he did accept that there would be an onus on the hosts to try to and win the game, something he insists, his players always try to do.

“We are at home, it’s up to us, as I mentioned at the press conference after the game, we have to be on the front foot, take the crowd with us and give them something to cheer, whether we’re favourites or not,” he added.

“It seems strange that we could be favourites against Austria, though,” he continued, “when it’s a couple of years since they won all of their qualifying games to get into the Euros and were being touted as one of the top sides in Europe. They have a lot of players playing Champions League football but the performance against Uruguay gives us confidence.”

Asked about the reports of problems being encountered by his opposite number, Marcel Koller, in relation to injuries, suspensions and, in particular, the unwillingness of a couple of players to make themselves available for the game, O’Neill said he remains sceptical.

“I’d take that with a pinch of salt,” he said. “I’ve heard that countless times over the years and it’s the exact opposite when you get on the field of play. They didn’t cover themselves in glory in the Euros, but their qualification was fantastic. I’d have thought they would have a point to prove.

“They have to come and try and win the game to get into it, it’s up to us to try and keep that points differential between us. It’s still all to play for but I still feel they’re a top quality nation.”

1 Game Changers: Gary O’Toole took a stand when others turned their heads
2 Gerry Thornley: Munster will make for interesting case study when rugby resumes
3 Roger Wilson tackling the problem of bad technique in Texas high school football
4 Georgia and Fiji in line to join Six Nations sides in eight-team tournament
5 James McClean says he gets no support for abuse he receives
Real news has value SUBSCRIBE
Crossword Get access to over 6,000 interactive crosswords