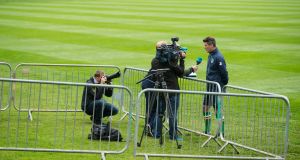 James McClean and three of the squad’s more established goalkeepers will join up with the 17 players who training at Fota island on Thursday morning ahead of Monday’s flight to New Jersey where Ireland will play Mexico next Thursday evening.

Cork City goalkeepers Mark McNulty and Alan Smith have played a part in the training camp but the pair have returned to their club ahead of Friday’s league game against Shamrock Rovers, and so, Darren Randolph and Colin Doyle are on course to make the trip to the US.

“We’ll be bringing the lads who were here the last few days,” said Roy Keane after training “(and) the three keepers will be joining up with us for the weekend as will James McClean. It’s part of the preparation, we just hope they do well.

“We want them to give the manager a headache for Uruguay but, more importantly, the Austria match.”

The likes of Alan Browne and Declan Rice, both involved at this level this week for the first time, have, he suggested, done all that could have been asked off them in terms of their attitude to and application in training.

However, greater tests lie ahead, he explained: “We are going to New York for a game and (you want to see) what is their attitude going to be like over there; how are they going to get on with the group. But as you’d expect, it’s stating the obvious, they’re all looking forward to it.”

The squad is well catered for in defence but Keane acknowledged that another newcomer, Kevin Long, might well come into contention, given the fact that he has made the breakthrough with his club in the English top flight even if it has taken the 26 year-old Corkman a while to get his chance.

“You have to be patient sometimes but he’s obviously had a good few months,” he said. “He’s been in the background at Burnley for quite a while. I know one or two of the staff members there and they speak highly of him; Burnley turned down plenty of offers for him to go out on loan in the Championship and he’s got his chance in the Premier League recently and done well.

“I’ve seen him a couple of times. He’s a good strong boy. Obviously, he’s not a kid and I’m sure if he gets a chance in Mexico he’ll take it. And that’s what happens in football sometimes. Sometimes fellas come into the squad at 18 or 19 years of age whether it’s a Robbie Keane or a Brady and then other lads come in a bit later in their career and that’s fine also.

“As I’ve said, we don’t have the biggest pool of players so if lads are playing, particularly at Premier league level, then obviously they are going to be considered.”

Ireland-based Stephen Kenny can offer FAI welcome stability 06:00
Felipe Contepomi: Lockdown a double-edged sword for the likes of Johnny Sexton 06:00
Sonia O’Sullivan: Running in a bubble as the shoe wars raged 06:00
Joanne O’Riordan: Return to play is fraught with perils and possibilities 06:00
Stephen Kenny undaunted as a bold new era beckons for Ireland 06:00