O’Neill ready to turn his attention to tried and trusted 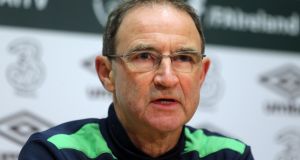 Martin O’Neill: “I don’t really want to have a history of players with one or two caps who have fallen by the wayside.” Photograph: Lorraine O’Sullivan/PA

The Republic of Ireland squad will start to take on a more familiar look this afternoon when Martin O’Neill and the 19 players who travelled for last night’s friendly against Mexico in New Jersey touch down in Dublin and make their way back to the hotel.

The bulk of the more established players who missed the trip are due to be waiting for them and several of those fresh from the plane may be allowed to head off for their holidays still wondering whether they have done enough over the past week or so to carve out a little more of an international future.

O’Neill was as good as his word in last night’s game; there were no cameos from college footballers he had not laid eyes on before calling them up but he admits he has little idea who or how many of the more peripheral characters on this week’s trip might go on over the next few years to seize centre stage.

“I really don’t know,” he says. “I think it’s a really natural progression. Some people come up and do well and other people just fall by the wayside. I think that’s the way at international level.”

His message to the players beforehand had, he said, been simple enough: go out there and try to do something: “influence the game while you’re on. But how many will come through from this to be celebrated Republic of Ireland players? I could not tell you.”

He remains, he says, conflicted about handing out caps to players who may not have really earned them and yet there is increasingly little choice on these American trips but to throw in the untried and untested.

When Ireland came to the United States for the first time under Jack Charlton in 1991 it was questionable about how much value might have been attached to the game outside Boston against the United States but it was certainly a strong squad with almost everyone who had featured in the qualifying game against Poland the previous month – the likes of Packie Bonner, Ray Houghton and Paul McGrath – all getting on the plane.

With little to prove to the manager, their priorities might not have been strictly football related and there were plenty of distractions with the schedule of events including various social events and receptions which were most likely better organised than a training session that involved both teams going through their paces on the same practice pitch.

By the time Steve Staunton returned as a manager for two games in 2007, the bulk of the senior players were opting to spend their summer elsewhere and Kevin Kilbane aside, the 10 players that took to the field against Ecuador had 13 caps between them.

The trip might well have contributed to the development of players like Kevin Doyle, Shane Long and Stephen Hunt all of whom featured at a time that they were fairly fresh-faced but heading into last night’s game, nine of that squad had not featured for Ireland again and through no fault of his own that student, Joey Lapira, became a sort of byword for the excessively casual awarding of caps.

“It does plague me a little bit,” says O’Neill now, “the idea of giving players a game to see what they’re like and feeling, well, actually they haven’t earned it because it’s still an honour to play for your country which is something they accept. I don’t really want to have a history of players with one or two caps who have fallen by the wayside and yet somewhere along the way I have to find out about them and if they are not playing at club level I have to find out what they are like here with us because the choice is not that great.”

A little like David Moyes at Manchester United, perhaps, Staunton’s biggest mistake was to think he could regard the trip as part of what he said was a four year plan when nobody, no matter what they are told when being appointed, really gets that amount of time to build something in football management.

O’Neill knows that better than most and rather than worry too much about next year, a key aspect of the Mexico game from his perspective will be how it helps to prepare the players set to feature against Austria next week.

After a difficult season at Derby, Cyrus Christie’s involvement is particularly significant with O’Neill having been anxious to give the full-back playing time before he steps into Seamus Coleman’s shoes again in a qualifying game.

Christie’s attacking style of play, it seems, is not entirely to new Derby manager Gary Rowett’s liking and it is not clear whether he would feature regularly next season if he stays at the club although the 24-year-old dismisses the suggestion that he actually needs to secure a summer move and seems confident about his future.

“It’s not a concern for me really,” he says. “I know what I’m capable of. I feel that I’m one of the best full backs in that league and on my day I think I am the best in the league. For me it’s about playing my game and sticking to it and adapting to what the manager says.

“At the end of the day, they pick the team, they know what’s best for them, that’s their style and you have to adapt. I’ll do that, I’m old enough now and mature enough and have had enough experience in this game to know what managers want and don’t want and like I said I’m not going to worry about that. I’m going to focus on the national team; to play for this country and do well and qualify for the World Cup.”

If flying to America and back has played even a small part in sharpening that focus then O’Neill might just reckon the entire thing really has been worthwhile.

1 Nadia Power determined to push on to the next level
2 The Best Of Times: Harrington stares down Garcia in epic Claret Jug battle at Carnoustie
3 College football turns blind eye to Covid-19 by risking players' health
4 Coronavirus has turned Viktor Hovland into long drive champion
5 Rugby impasse continues as no deal reached in fourth round of IRFU salary talks
Real news has value SUBSCRIBE
Crossword Get access to over 6,000 interactive crosswords