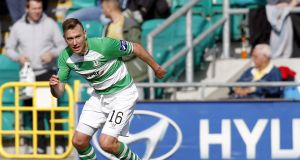 At home to Bray Wanderers on Friday night and a trip to bottom side Longford Town next weekend offers Shamrock Rovers the not unreasonable expectation of finishing the first series of Premier Division games with a needed flourish of two wins.

Defeats to title rivals Dundalk last Friday and then Monday’s reversal at Cork City has seen Pat Fenlon’s side drop to sixth place in the Premier Division table with a tally of four losses already this season, the same number of defeats incurred in the whole of their 2015 campaign.

And while Patrick Cregg accepts Rovers have been second best to their main opponents to date, the midfielder consoles himself with the thought that a blip now is better than one at the business end of the season.

“We’re nine games into the season now and obviously there are four or five teams who are better than us at this moment,” said Cregg ahead of Bray’s visit to Tallaght Stadium on Friday.

“We’ve got to know mentally that it’s going to be a long, tough season. We’ve got to stick together and prove what we said at the start of the season that we want to be the best team over 33 games.

“The first nine games we haven’t been. But there have been plenty of teams who haven’t started the season well who have finished it well.

“I’d rather have the blip now than in the title run in.”

The return from suspension of Gary McCabe boosts Rovers’ midfield options tonight. Left back Luke Byrne is out for the season having suffered a bad knee injury in Cork while David O’Connor also remains out. Striker Gary Shaw needs to prove his fitness.

Defender Hugh Douglas is suspended for Bray who on Thursday announced that former Republic of Ireland international Liam O’Brien has been appointed as assistant to caretaker manager Harry Kenny.

Though captain Derek Pender, Anto Murphy and Dylan Hayes return, Bohemians are without Eoin Wearen, Ismahil Akinade, Jason Caffrey and Adam Evans as they strive to bounce back from successive defeats when facing champions and league leaders Dundalk, who are missing injured captain Stephen O’Donnell and striker Ciaran Kilduff, at Dalymount Park.

Midfielders Harry Monaghan and Gareth McGlynn remain out injured for second-placed Derry City, unbeaten now since the opening night of the season. Sligo Rovers, who are without defender Tim Clancy due to illness, are the visitors to the Brandywell on Friday hoping to build on their first league win of the season last week.

Up to third in the table following Monday’s win over Shamrock Rovers, Cork City host St Patrick’s Athletic without injured defender Eoghan O’Connell who has returned to parent club Celtic for treatment.

Kenny Browne should return to the Cork back four following suspension while fellow defender Alan Bennett and striker Karl Sheppard are carrying knocks.