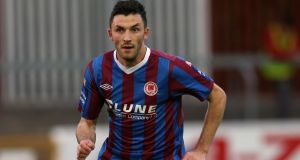 Brennan played a key role in the Inchicore side’s title success in what was his first season at the club.

The creative midfielder, who was previously with Derry City, Bohemians and Shamrock Rovers, scored eight of the club’s 56 league goals and created quite a few others in what was a very impressive campaign.

Towell picked up the Young Player’s Award at last night Tissot sponsored event ahead of Hoban and Daryl Horgan with the Dundalk midfielder recognised for his central role in what was a remarkable season for Oriel Park outfit.

The former Celtic trainee thrived at the club where he handed a great deal of responsibility by manager Stephen Kenny. He started out primarily providing a link between defence and midfield but ended up contributing a great deal more to the attacking side of things with two goals and three assists in August alone, when he won the SWAI’s Player of the Month award.

A year on from having been let go by Rovers after less than a full season in charge at Tallaght, Kenny was named Manager of the Year last night.

The Dubliner assembled an exciting squad of young players at Dundalk and guided them to second place in the league. The club also reached the semi-finals of the FAI Cup only to be beaten in controversial circumstances by neighbours Drogheda United.

New year
Athlone’s Philip Gorman won the First Division Player award while Seamus Coleman was voted Best Overseas Player. Alan Kelly, who will leave for the MLS in the New Year, picked up the referee’s award.

Rovers, meanwhile, have confirmed the signing of title winning St Patrick’s Athletic captain Conor Kenna, meanwhile, with the 29-year-old becoming the third defender of the week after Simon Madden and Luke Byrne to sign for Trevor Croly’s side.

“Obviously I had a good year last season with St Pat’s,” said Kenna, “and it was hard to decide to leave but Shamrock Rovers had approached me two or three times throughout my career and it felt like the right move for me now. I am glad it’s all finalised and we have an exciting challenge ahead of us next season.”

Dan Tuohy explains ‘rotten to the core’ comments 18:08
Serie A matches to be played behind closed doors due to coronavirus 17:54
Sam Bennett sprints to second in stage two of the UAE Tour 15:55
Northern Irish FA ban children aged 12 and under from heading footballs 15:18
Panorama show Mo Farah changed account to anti-doping investigators 14:41