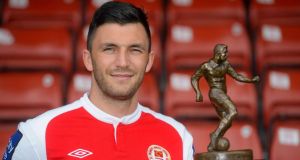 St Patrick’s Athletics’ Killian Brennan, who was presented with the Airtricity/SWAI Player of the Month Award for May on Thursday. Photograph: Sportsfile

Their six-point lead over and significantly better goal difference than second placed Derry sort of speaks for itself but the scale of St Patrick Athletic’s superiority of late was underlined yesterday when the results of the poll for May’s Airtricity/SWAI Player of the Month were revealed.

That one of the club’s players, Killian Brennan, would take top spot almost went without saying but what is rather more remarkable is the fact that two if his team-mates, Christy Fagan and John Russell, came in second and third.

In fact you could fairly handily list off another few strong contenders with various members of Liam Buckley’s back five, for instance, perhaps feeling a little aggrieved not to be getting a little more recognition as the league leaders have gone five games without conceding. The last time they lost was against tonight’s opponents, Dundalk, a couple of months back and while Buckley is clearly pleased with the way the season is progressing, he is wary of a side that has won six of its last eight outings in the championship.

“They beat us earlier in the season so we don’t need to be reminded about how good they are,” he says. Buckley has Russell available again after an ankle injury but he is unlikely to shake things up too much. Stephen Kenny, on the other hand has a few decisions to make with John Mountney and Stephen O’Donnell both suspended while Eoghan Osbourne is a doubt with an infection. Darren Meenan and John O’Sullivan both return from bans, however, and Tiarnan Mulvenna could well start after coming on in the win over Drogheda United.

Bray bound
Derry will be hoping Dundalk can take something from the game but they may be a little more nervous than usual regarding their own fate as they head to the Carlisle Grounds.

City are unbeaten in eight at Bray but the home side are on quite a run themselves of late and Jason Byrne is positively flying with nine goals in his last three outings. Dermot McCaffrey and Thomas Crawley miss out for the visitors while Barry Molloy is a major doubt but Wanderers have problems too with Shane O’Neill and Eoin Hyland sidelined while Danny O’Connor and Ismahil Akinade face late tests on Achilles and calf problems respectively.

Shamrock Rovers will be looking to make it seven league games without a defeat when they take on a Limerick side in Tallaght that is short of bodies due to injuries and exams.

The hosts are without Mark Quigley, Shane Robinson and David Elebert while Barry Murphy and Jason McGuinness are doubts. Daniel Ledwith comes back into contention to start, however.

Cork City and Drogheda United with one win in six and seven respectively meet at Turner’s Cross. The hosts haven’t kept a clean sheet in the league since the opening weekend of the campaign but they still might fancy their chances against a United team that has been making a habit of losing narrowly of late.

Shelbourne, meanwhile, head for Dalymount in the hope of ending a five-match losing streak and 395 minutes without so much as a goal. Johnny McDonnell is without Paul Crowley, Rob Cornwall and, most likely Robert Bayly while the hosts have doubts about Owen Heary, Keith Buckley and Luke Byrne.