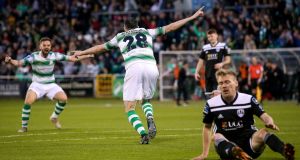 Joey O’Brien scored his first Shamrock Rovers goal as they eased to a comfortable 2-0 victory over Cork City at Tallaght Stadium.

Roberto Lopes added a second for the Hoops as Stephen Bradley’s side remain level at the top with champions Dundalk, separated by goal difference.

Former Republic of Ireland international O’Brien opened his account with a fine finish early in the second half as the relentless pressure finally told on John Cotter’s side.

The ex-Bolton Wanderers and West Ham man was denied a second by a brilliant Mark McNulty save before centre half Lopes sealed the win with a header.

City were robust and combative throughout – picking up four yellow cards – but rarely threatened against a side who’ve taken up their mantle as challengers to Dundalk.

Garry Buckley was booked for City within 30 seconds for a heavy challenge on Dylan Watts, and Ronan Finn joined him in the book five minutes later for a late tackle.

City threatened first as Daire O’Connor showed fleet of foot to make space on the byline but his cut-back to Karl Sheppard was hooked clear by Finn.

Jack Byrne was at the heart of all Rovers’ attacking play and he picked out Trevor Clarke to swing in a cross-turned-shot that required Mark McNulty to palm the ball out of play.

City were caught unprepared from the quick throw-in, allowing Finn to aim a low cross to Dan Carr, but the striker let it run under his foot with McNulty scrambling to cover.

Clarke went close again shortly after, with another looping cross deceiving McNulty and rebounding back off the crossbar.

City were left to feed on scraps and, when they did, they were wasteful, former Hoops striker Sheppard blazing over at the end of a rare counterattack.

An outstanding Byrne through-ball picked out Carr on the burst and the winger easily outstripped Colm Horgan but couldn’t pick out Aaron Greene with his cross.

Lopes had Rovers’ best chance of the half when he glanced Byrne’s header wide and, though the sides went in level at the break, it was only a matter of time.

Greene headed a Byrne corner wide early in the second half before O’Brien broke the deadlock, elegantly side-footing home Finn’s cross through a maze of bodies.

O’Brien was desperately unlucky not to have a second when he met Byrne’s deep free kick with his head, but McNulty did brilliantly to get down and tip it around the post.

Lopes made it two from the resulting corner, however, peeling away to the back post and nodding Byrne’s cross into the corner of the net.

City showed some grit to try and force their way back in, with Buckley’s low cross calling Allan Mannus into action before Sheppard’s shot was turned off the line by O’Brien.

Clarke had an opportunity to seal the tie in the dying minutes as he was played in by Brandon Kavanagh but he couldn’t find the target from a narrow angle.