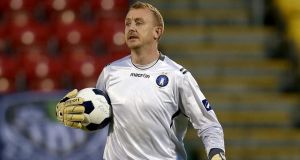 LIMERICK FC 2 ST PATRICK’S ATHLETIC 0 Danny Galbraith scored his first goal for Limerick since joining the club from Hibernians in February of last year. His score, after 62 minutes, lit up Thomond Park as it inspired a badly needed win for the home side and i caused the shock of the night.

Six minutes from the end the 23-year-old Scot laid on the pass for Jason Hughes to score a second for the home side, who were denied a third goal when Brendan Clarke made a superb diving save to deny Rory Gaffney.

The visitors had dominated the first half and Ian Bermingham was causing problems for the Limerick defence f and created chances for Chris Forrester and James Chambers, both of which were fluffed.

Limerick had another escape after 28 minutes when Sam Ojo was fortunate not to have an own goal as his clearance whizzed inches out for a corner from which Keith Fahey’s cross reached Seán Hoare, who shot wide.

The best scoring chance fell of the half to Limerick after 33 minutes. Shaun Kelly’s floated cross tempted goalkeeper Brendan Clarke off his line but he collided with a team-mate and the ball broke to Shane Duggan. Faced with an unguarded goal the Limerick man managed to head wide.

Four minutes before the break Kenny Browne had a chance to put the visitors in front but he headed straight into the arms of Ryan.