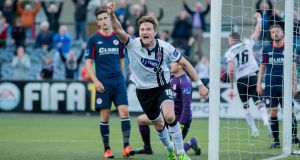 Former Pat’s striker Ciaran Kilduff broke the deadlock in the 73rd minute when he fired home from close range and the big striker had a big hand in the second goal eight minutes later, Ronan Finn tapping home after Kilduff’s header came back off the post.

A scrappy first half ended scoreless as both sides struggled to get back into their rhythm. Dundalk goalkeeper Gary Rogers was relatively underemployed for much of the half but he was given a huge fright in the 20th minute when Conan Byrne attempted the spectacular from the halfway line, the Lilywhites netminder adjusting his feet well to get back and tip the ball to safety.

Patrick McEleney then tested Clarke for the first time in the 34th minute, his swerving right footed effort parried by the goalkeeper with the loose ball just evading the incoming Kilduff.

Things improved considerably after the break and Daryl Horgan flashed wildly over the top after good set up play by Finn in the 63rd minute.

The vital goal arrived 10 minutes later. Again, McEleney was the instigator, holding the ball up well on the left of the penalty area to caress a low ball across the face of goal which Kilduff dispatched from five yards.

Stephen Kenny’s side put the result beyond doubt with nine minutes left to play. Kilduff rose to meet a deep cross by John Mountney only to head against the woodwork but Finn was there to tap the loose ball into an empty net.

Cork City conceded ground to Dundalk at the top of the table after they played a scoreless draw with Shamrock Rovers at the Tallaght Stadium.

The Leesiders had started the proceedings in a positive fashion, but it was City netminder Mark McNulty who was forced into the action on 12 minutes after Rovers winger Dean Clarke found room to shoot from a tight left-hand angle.

Opportunities proved to be few and far between during the first quarter, although Cork front man Seán Maguire was marginally wide of the mark following excellent work on the left-flank by Stephen Dooley.

Rovers centre half Robert Cornwall fired over from a well-directed set-piece just 10 minutes prior to the interval, before the Cork duo of Maguire and Kenny Browne joined Cornwall in receiving yellow cards during a fiery end to the opening period.

Lively Rovers attacker Brandon Miele was off target from distance upon the resumption, but in spite of the endeavour on display, a breakthrough score had yet to arrive when the hour mark arrived.

The Hoops were beginning to increase the pressure on their opponents, however, and substitute Seán Boyd spurned a promising chance from a Simon Madden delivery in the 68th minute.

Cork introduced Mark O’Sullivan and Danny Morrissey in an attempt to swing the outcome in their favour, but with the Rovers back four as well as accomplished custodian Craig Hyland proving to be resilient throughout, they had to settle for a share of the spoils.

Bohemians and Galway United took a point each from this game that was played before a crowd of 963 at Dalymount Park.

After a Stephen Folan header for Galway was ruled out for offside Bohemians took the lead on 11 minutes when Ismahil Akinade slotted a low shot confidently past Galway goalkeeper Conor Winn from just outside the six-yard box.

Galway could have been level two minutes later after Ryan Connolly sent a wonderful cross to John Sullivan on the edge of the Bohs box but his strong shot was straight at Dean Delany in the Bohs goal.

Galway got their equaliser though on 30 minutes when Connolly flashed a cracking drive past Delany from about 25 yards.

Delany then made good saves from Colm Horgan on 35 minutes and Connolly on 41 as Galway upped the ante.

Both sides had plenty of the ball in the second half but neither could make any of them count and it ended all-square.

Nathan Boyle netted the only goal at the Brandywell, the Derry City winger taking full advantage of poor defensive play in the 18th minute.

In what proved a disappointing game overall, Wexford Youths were always in this match and Shane Keegan’s men will reflect on their failure in the final third.

The goal which decided the destination of the points was fashioned by a high ball into the Wexford penalty area from Derry full back Dean Jarvis.

Wexford centre back Ryan Delaney failed to cut out the danger and when the ball bounced between Craig McCabe and goalkeeper Graham Doyle, the alert Boyle exhibited his predatory instincts to poke the loose ball past the goalkeeper from 10 yards.

Derry failed to build on that advantage while Wexford will point to wasted chances from Danny Furlong, Paul Murphy and Eric Molloy.

A second successive scoreless draw for Bray Wanderers earned them a valuable point at the Showgrounds against Sligo Rovers last night.

The visitors shaded the first half but had to withstand some late Rovers pressure in a game that featured nine yellow cards.

Rovers were without the suspended Raff Cretaro, but had an early shout for a penalty when Jimmy Keohane went down in the area.

But Bray were the better team after this and Dylan Connolly tested Micheál Schlingermann with a shot from the edge of the box.

Mark Salmon put the ball in the net on 21 minutes, but was offside as he latched onto an Andrew Lewis cross.

Craig Roddan, Keohane and substitute Phil Roberts all had chances to win it as the home side finished strongly, but Bray held out.

First goals of the season from Josh Mailey and Tony McNamee brought Finn Harps a first away win of the campaign to leave Longford rooted to the foot of the Premier Division table.

Early chances from Mark Hughes and Philip Gorman came to nothing for Longford as they found themselves behind against the run of play on 18 minutes.

Ethan Boyle nodded the ball back into the Town area following a corner and defender Mailey, on his first start of the season following injury, beat Paul Skinner with a looping volley off his right foot.

Harps got their second goal on 74 minutes when a poor clearance dropped into the path of McNamee who drilled low to the net.