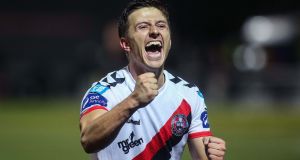 Bohemians’ Keith Buckley celebrates at the end of the FAI Cup quarter-final against Derry City at the Brandywell. Photograph: Lorcan Doherty/Inpho

Bohemians continued their fine end to the season and are now well placed to figure prominently in this year’s FAI Cup following this semi-final win at a rain-lashed Brandywell on Wednesday night.

Striker Dinny Corcoran netted a brace goal goals, his second coming in the 93rd minute to settle things after Derry threatened to spoil the party.

While Keith Long’s side may have survived a nervous finish after leading 2-0 midway through the second half, they deserved this victory having dominated the vital areas.

Ironically, the home side really should have broken the deadlock in the 10th minute during their first attack.

Aaron McEneff did well to weave his way past Bohs centre back Dan Casey to send Ronan McHale free on the right. However, the winger opted to go it alone and his shot from an acute angle was blocked by goalkeeper Shane Supple.

Bohs issued a statement of intent five minutes later when Casey headed a free-kick across the face of the Derry goal before Ger Doherty rose to punch the ball clear of the danger area.

A powerful Kevin Devaney drive kept Doherty alert, the goalkeeper getting down to divert the ball wide at the expense of a corner.

Bohs got their noses in front in the 43rd minute with a timely goal following a corner.

Devaney floated the ball into the danger area and Casey, totally unmarked, rose to head the ball firmly home to give the Dubliners a significant boost before the half-time whistle.

Following the change of ends, Bohs went close to doubling their lead in the 52nd minute, Corcoran’s acrobatic snapshot well saved by Ger Doherty who played a captain’s role by keeping his team in this game.

Bohs spurned another glorious chance in the 55th minute when Casey rose again unchallenged to head Keith Ward’s corner wide of the target.

In the 58th minute Bohs doubled their advantage. A superb move which started with a headed clearance by Casey, saw Kelly feed Corcoran and the cool striker took his time to bring the ball under control before finding the bottom corner of the net giving Doherty no chance.

Derry finally gave their supporters something to shout about when Jamie McDonagh broke down the right flank and his teasing low centre was immediately driven into the net by the advancing Ally Roy to reduce the deficit.

Ronan Hale brought the best out of Supple in the 72nd minute, the goalkeeper diverting the ball over his crossbar with a spectacular save as the home side drove forward with confidence.

Kenny Shiels’s side finished strongly and while Kelly could have ended the tie at one end, young sub Adrian Delap went so close to securing an equaliser.

But Bohs maintained their composure with Corcoran providing that tidy finish at the death to set up a semi-final meeting with Cork City.