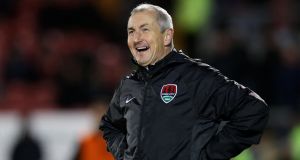 Cork City coach John Caulfield: We need to be at our highest intensity, our highest performance levels” Photograph: Inpho

Cork City will look to put their League Cup elimination behind them and take up where they left off in the Premier Division with John Caulfield’s side heading to the Bray Wanderers’s Carlisle Grounds today in search of what would be fourth straight win; a run that that had provided some significant upward momentum.

“Last week was very good and I have been saying to the lads they have raised the bar and that is the level they need to play at,” says Caulfield, whose players have beaten Dundalk and Shamrock Rovers in the league but then let other points slip rather through their fingers. “We need to be at our highest intensity, our highest performance levels and I feel, if we are at that, we will win the match.”

Sligo’s recent league form is almost as good as Cork’s but the win at the Brandywell last week seemed to complete their transformation from a side that, in the opening weeks, seemed utterly incapable of even seriously testing opponents.

“It was a very mature performance from the whole squad in Derry,” says manager Dave Robertson. “Derry are a very good team who had won all four games before that. It was a fantastic performance from us and an equally good result.

“I have seen them play and they are a strong side and will have a couple more players back for tomorrow. They will be a threat from set-pieces and with the long throws they have so we are aware of all that. We have done plenty of work this week to be able to counter that. We will not be taking them lightly.”

Shamrock Rovers could do with taking all three points at Longford, whose morale got a lift by the comeback in Galway, as they try to narrow the gap between themselves and the top of the table but Pat Fenlon has problems to deal with in defence as, in addition to long- term absentee Luke Byrne, David O’Connor is set to miss out and Max Blanchard is considered a doubt.