League title remains the clear priority for the Saints’ boss 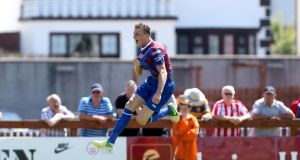 Anto Flood, who may return for St Patrick’s Athletic tonight, celebrates a goal against Sligo Rovers at the Showgrounds. Photo: Ryan Byrne/Inpho

With Ian Bermingham, Greg Bolger and Anto Flood having used up one-game suspensions in their EA Sports Cup quarter-final defeat to Shamrock Rovers in midweek, St Patrick’s Athletic report a clean bill of health as they strive to at least maintain their three-point lead at the top of the Premier Division table when Cork City visit Richmond Park tonight.

“As much as you’d love to be putting out your best XI every week, you can’t do that,” explained St Pat’s manager Liam Buckley.

“You need to make sure you balance it somewhere along the line. There are fellows carrying knocks and there is a suspension here or there. Fellows come in, and if we are going to get this over the line (win the league) we need to balance that out properly. You’ll see against Cork, there will be changes again.”

Shane Duggan returns from suspension for Cork who remain without injured defenders Darren Dennehy and Kevin Murray and midfielder Colin Healy. Midfielder John Dunleavy is a doubt while striker Denis Behan is unavailable due to family commitments.

Dundalk have key defender Andy Boyle and playmaker Richie Towell returning from suspension for the visit of Bray Wanderers to Oriel Park.

Keith Ward and John Mountey remain out injured while left-back Dane Massey (knee) will be given every chance to prove his fitness. Bray’s experienced midfielder Kevin O’Connor returns from suspension while new signing Stephen Quigley comes into the squad.

Anto Murphy, who re-signed back from non-league Sheriff YC this week, comes straight in to help shore up former club Bohemians’ defence in the absence of the suspended Derek Pender and Luke Byrne as the managerless Dubliners seek their first back-to-back wins of the season at home to Drogheda United.