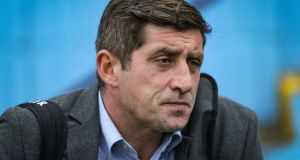 Derry City manager Declan Devine sees Friday night’s game against Bohemians as a gauge of where the club is at. Photograph: Inpho

The true Bohs believers will see Friday’s visit of Derry City to Dalymount as an opportunity to cut the gap at the top of the table from eight to five points. But those more resigned at this stage to the inevitably of Shamrock Rovers winning the title might be more inclined to focus on the opportunity for Keith Long’s side to put a bit more daylight between themselves and Dundalk. Either way, it is a big game for the hosts.

Derry won the meeting up at the Brandywell but have not won all that much since – just two from eight league outings – and so Declan Devine could do with a decent result too, even if he is working hard to see the upside ahead of the trip to Dublin.

“A lot has been made of our recent run,and while I’ve said many times in the past few weeks that we need to work on our creativity, we have only lost once in our last six league matches,” said the City boss.

“We’ve had too many draws – we know that – and we’ve talked again of the need to play on the front foot. Bohs have been excellent this season, but we have to be positive. I want us to try to win the game and this will be a good benchmark for us as to where we’re at.”

Stephen Mallon is expected to travel for the game despite struggling with a knock of late but Ally Gilchrist, Gerardo Bruna and Joe Thompson are all out.

Long, whose side got back to winning ways against Sligo after having had their title hopes severely dented by the losses to Waterford and, in particular, Rovers, has pretty much a full squad to pick from apart from Kris Twardek who is suspended.

Waterford, meanwhile, have confirmed that Fran Rockett will, following John Sheridan’s recent return to England, be in charge of the first team for the rest of the season. David Breen returns from Wexford to work as his assistant. The club announced on Wednesday that striker Michael O’Connor had joined Scottish side Ross County.