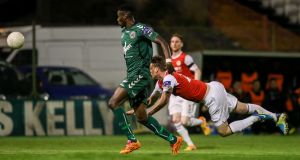 Bohemians’ Ismail Akinade: was on target twice in the victory over Derry City at the Brandywell. Photograph: Gary Carr/Inpho

Bohemians’ hopes of Europa League football next season will be decided in the final matches of the season following this victory at the Brandywell.

With St Pat’s seemingly in freefall, the “Gypsies” remain on track and their final game against cup finalists Cork City could prove very interesting.

Hero of the half was lone hitman, Ismahil Akinade, who netted a brace and, indeed, could so easily have notched a hat-trick but for a fine stop by Derry ’keeper, Ger Doherty.

Bohs caught Derry cold during the opening two minutes when Anto Murphy played Akinade through into a one-on-one situation, the striker calmly guiding the ball past the helpless Doherty.

However, that lead was short-lived with the home side levelling matters within one minute, Ciaran O’Connor heading home Mark Timlin’s inviting deep cross.

But back came Bohemians in the 25th minute and following Jake Kelly’s corner, Akinade was in the right place to divert the ball past Doherty with a firm header.

Five minutes later Derry levelled for a second time when a fluent move was completed with Mark Quigley’s incisive pass setting up Barry McNamee who fired past the advancing Dean Delany.

Defensively suspect, Derry paid the penalty when failing to clear the danger in the 35th minute, Kelly leaving two defenders in his wake before netting Bohemians’ third goal.

After the break Delany produced a superb save to deny Derry striker Mark Quigley in the 50th minute. He pulled off other fine saves to deny Stephen Dooley in the 75th minute and the luckless Quigley ten minutes from time.