10-men Bohemians hold on to see off Sligo Rovers 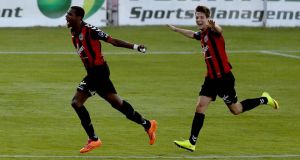 Ismahil Akinadi scored his first goal for Bohemians in their 1-0 win over Sligo Rovers at Dalymount Park. Photograph: Inpho

Sligo played for almost an hour with a numerical advantage after Anto Murphy’s sending off, but could find no way past Bohemians’ determined defence, marshalled superbly by skipper Roberto Lopes while goalkeeper Dean Delany made several telling saves.

The blustery conditions scarcely helped as the game struggled to spring to life early on.

Bohemians’ Paddy Kavangh might have provided the spark to ignite it on 21 minutes, but blazed aimlessly over the top from Adam Evans’ fine deep cross from the left.

Akinade then spun past a defender only to scuff his shot wide as the game thankfully began to open up.

Sligo’s threatened for the first time on 23 minutes; Estonian winger Sander Puri cutting in from the right to force Delany to push his left foot drive out for a corner at full stretch.

The move of the half then had Bohemians in front on 31 minutes.

From Murphy’s throw on the right, Kavanagh’s low cross was flicked on by Keith Buckley for Akinade to confidently drill past Richard Brush from about 12 yards.

Sligo might have been level within two minutes. A scramble in the home area resulted in Gary Armstrong’s shot being deflected out for their second corner of the game.

Two minutes later, Bohemians were down to ten men.

Murphy slid recklessly in with studs showing on Sligo skipper David Cawley and could have little complaint when McLaughlin brandished a straight red card.

That energised Sligo who finished the half strongly with Puri again working Delany two minutes before the break.

Sligo brought Morten Nielsen on and went two up top as they chased the game from the resumption.

They struggled to create chances, though, as Akinade came close to doubling Bohemians’ lead three minutes in when shooting wide of the far post.

Gradually making use of their extra man, Sligo finally troubled the home goal again on the hour mark when Alan Keane glanced a header narrowly wide from Regan Donelon’s in-swinging cross from the right.

Two minutes later Delany was there to make a save at the foot of his post from Dinny Corcoran.

Sligo were then left flummoxed as to how they weren’t level on 66 minutes.

First Delany batted away a flicked effort from Corcoran.

The ball went straight to Puri, though, whose shot was blocked on the line by the impressive Lopes.

As the pressure mounted on the Bohemians, Nielsen was guilty of a sitter on 72 minutes, somehow shooting wide with the goal gaping from Corcoran’s cross.