Michael Walker: Uefa may trumpet Celtic’s return, but this side is a tribute act 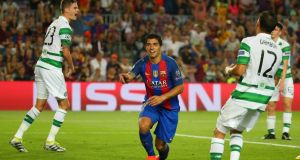 Not one club has successfully defended the Champions League title – or European Cup – since AC Milan defeated Benfica in Vienna in 1990 to retain the trophy they won against Steaua Bucharest a year earlier.

This fact contains some of the competition’s great appeals: its degree of difficulty and its unpredictability.

The 26 finals since Frank Rijkaard’s winner in Vienna have seen 14 different clubs from eight countries collect the trophy with the big ears. That suggests variety, and you know what they say about it.

And yet even as Andrés Iniesta lashed in a glorious volley to make it Barcelona 4 Celtic 0 (after less than an hour) on Tuesday night in Catalonia, there were other feelings mingling with the pleasure at seeing this Barcelona team’s ruthless smile. Sadness for one, not for Celtic, but for Scottish football; frustration for another, at the long, slow death of variety.

Just three years before that Rijkaard goal, Dundee United were winning 2-1 in the Nou Camp, Paul Sturrock was a beautiful scamp and Hamburg and PSV Eindhoven were powers in Europe.

Now we can comfortably predict the last eight in this season’s Champions League, or at least half of them. This is because for the past four seasons Real Madrid, Barcelona, Bayern Munich and Paris St-Germain have reached the quarter finals.

The last time Barcelona failed to reach the quarters was 10 seasons ago; Real Madrid have been in the semi-final or final for the past six seasons. The ‘unpredictable’ Champions League claim is not so convincing.

Variety has been trampled down by monopoly. It is the way of these things: those who propose and propel deregulation in the name of ‘choice’ tend to be the same people who benefit from its opposite. Understandably, big businesses want to remain big businesses and newcomers, alternatives – variety – threaten that. Big business supports deregulation as it enables it to get hands on turf previously ruled out-of-bounds. Hence it gets bigger, the mantra of ‘growth’.

This is why competition – sporting or otherwise – requires administration and governance, to ensure there is competition. But that administrative structure must be strong and too often it has been weak. It feels lax now.

The English Football Association effectively walked away from its responsibilities to the wider game when it sanctioned the breakaway Premier League in 1992 and everything that has flowed from that rupture.

“That abdication of leadership gave the clubs notice that they had a free hand, that the governing body wasn’t up to doing much governing at all,” is how David Conn put it in his book The Beautiful Game?.

Conn quotes the England manager of the time, Graham Taylor, saying: “I think a lot of this is based on greed.”

Which brings us back to Uefa, the Champions League and an elite group of clubs whose success and wealth is self-perpetuating. They govern Uefa.

Cartels are excluding and unattractive – unless you’re on the inside. From there it looks great and you can dictate. Why should the Barcelona hierarchy fret about the gradual downgrading of Celtic or Ajax or Anderlecht? Their concern is Barcelona.

However, the authorities, La Liga and Uefa, should be at least intrigued by the 7-0, 6-0 and 5-0 scorelines the opening nights of the Champions League group stage have given us. Uefa might want to think about Barcelona’s 10-year record in the competition and ask themselves if they want the next 10 years to be the same. Because if they do, if they think Barcelona reaching 20 consecutive quarter-finals is something to aim for, then they too are guilty of an abdication of leadership.

But that is the way it’s going. There is a concentration of money that renews the powerful. Uefa may trumpet Celtic being back, the Parkhead atmosphere, the colour and noise blah blah. But this is Celtic as a tribute act; Uefa know Celtic won’t be troubling the Champions League after Christmas.

And there’s something not very sporting about that predictability.

It’s as if there is a dread, a fear within Uefa about the established clubs not dominating. Yet among neutrals, who can say they have missed Chelsea or Manchester United this week?

The good news, the refreshment, has been Leicester City. They have brought novelty and genuine excitement. Maybe Leicester will inspire others, though we must doubt the economic capacity of others to be inspired.

Yes, Barcelona 7 Celtic 0 was mesmerising; but this was more than a match, this was a statement about how things are, and will be.

Celtic play Inverness Caledonian Thistle tomorrow. Therein lies their problem. From Barcelona to Inverness is not the issue, it’s the other way round. ICT offers no preparation – sporting, economic, cultural, scale – for the Champions League.

That said, Celtic cannot just hide behind the big Barcelona flag. What happened on Tuesday may have been historic in its scoreline, but Celtic have hardly been unfamiliar with European embarrassment over the past few years. It was only in July that they lost to Lincoln Red Imps in Gibraltar.

Bratislava, Utrecht, Warsaw, these are other places associated with Celtic failings. The structure of football is not to their advantage, but those results suggest Celtic have needed to defend better for some time.

Monk could have pulled rug from Cellino

How great it would have been had Wednesday morning brought news of Garry Monk’s resignation from Leeds United. Instead the newspapers brought speculation Monk was about to be sacked, though maybe Leeds’s late winner against Blackburn on Tuesday night altered that.

It will be surely only a temporary delay. Leeds United ‘owner’ Massimo Cellino has already got through Steve Evans, Uwe Rosler, Neil Redfearn, Darko Milanic, Dave Hockaday and Brian McDermott since taking over the club two years ago.

Monk, on a one-year contract, would have pulled the rug from under the Italian by walking. This would have shifted further scrutiny onto Cellino, and the Football League who ratified his takeover. Monk had Swansea City eighth in the Premier League this time last season. He could have one more game, at Cardiff City, where his discomfort is as likely to be pronounced as his club’s.

Lee Westwood fires flawless 62 to make the running in Scotland 20:00
Novak Djokovic rings up career win number 70 at Roland Garros 19:17
Champions League draw: Manchester United handed tough draw on return 17:27
Leo Cullen: ‘It feels like it all came crashing down on top of us’ 15:41
Genoa’s Serie A match postponed over Covid-19 outbreak 15:25

1 Champions League draw: Manchester United handed tough draw on return
2 Leo Cullen: ‘It feels like it all came crashing down on top of us’
3 Dave Hannigan: How Christy Ring aroused the curiosity of American media
4 Dundalk versus KÍ in the Europa League: TV details, kick-off time and more
5 When Down’s 1960 All-Ireland victory brought down barriers
Real news has value SUBSCRIBE
Crossword Get access to over 6,000 interactive crosswords