Michael Walker: Time for Arsenal to ask the tough questions 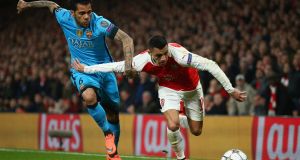 Alexis Sánchez of Arsenal takes on Dani Alves of Barcelona during their Champions League clash which Barca won 2-0: “What surprised was the level of Barcelona’s superiority.” Photograph: Paul Gilham/Getty Images

It was a German managed by a French man but it said something stereotypical about English football: Arsenal versus Barcelona on Tuesday night and as the respective captains tossed a coin for kick-off, it was startling to see Per Mertesacker – all 6ft 6in of him – tower over 5ft 7in Andrés Iniesta.

Someone with concerns about the nature of English football could have taken a snapshot and asked: what’s wrong with this picture?

It was incongruous and spoke to the perception – held beyond England and occasionally within – that there is still too much emphasis on physique, speed and drama, and not enough on patience, wit and skill.

And this was Arsène Wenger’s Arsenal. Yet as the game unfolded it became clear we would again be viewing the match via old certainties: English brawn versus continental sophistication. Almost 20 years after he succeeded Bruce Rioch, who succeeded George Graham who succeeded Don Howe, it was as if there had been no change. Where was the ingenuity? What did Wenger do that Graham would not have?

After two decades of the Wenger era, Tuesday’s yield was Alex Oxlade-Chamberlain panting full-pelt down the wing and Alexis Sánchez bolting around doing his own individual thing on the other flank.

Now these two are demonstrably fine players, as shown week in, week out in the Premier League, but here they were being assessed in the company of superiors.

What surprised was the level of Barcelona’s superiority. Arsenal were all-out individually and collectively from the start; by minute 71, when Lionel Messi scored his first, Arsenal were still puffing while Barcelona were pacing themselves around the final bend like Eamonn Coghlan 1983.

Busquets is mature and intelligent, always has been. There is the odd flicker of that dislikable yappiness of his past – yappiness does seem to be a Barca feature – but in his midfield and defensive cover work Busquets is like an adult in a playground. He has seen it before. Busquets knows.

With him present and correct, as he is usually, Barcelona can probe, wait, attack. There is a method in their shape and chemistry in their style. No one is out of sync, as Sánchez was for Arsenal. When that has happened – see Zlatan Ibrahimovic – the experience has been short-lived.

What Busquets also gives to this supreme team, as described by his colleagues, is his competitive personality. They like his bite and appreciate what it gives them: freedom.

It is another dimension Arsenal – by direct comparison – lack. As many fans will argue, they have lacked it since the days of Patrick Vieira. The complaint is so common it has become boring, but that does mean it is invalid.

Wenger initially replaced Vieira with Cesc Fàbregas, which worked in terms of passing, but there has been no adequate substitute for Vieira’s leadership and the identity he gave Arsenal.

Wenger’s team were tight and organised on Tuesday, but what else? Understandably they were concerned by Barcelona’s strengths but Arsenal knew all about that long before the draw was made. Was there not intense thought about how Barca could be overcome? Maybe the Arsenal players were too busy tweeting self-congratulatory photos of themselves.

The club – and the manager – are due another round of back-patting this September. It will be Wenger’s 20th anniversary at the club.

But Tuesday night raised a legitimate question as to whether this anniversary should happen. A comparison made before the game was about the two clubs’ respective progress since the 2006 Champions League final. That was Barcelona’s first of four European Cups in the past 10 seasons, plus six La Liga titles. Arsenal have won the FA Cup twice, once against Hull – 16th in the Premier League at the time – and once against Aston Villa, 17th. And they say La Liga is a flat-track division.

Wenger, whose salary is a reported €11 million a year, was one of the club men behind the move from Highbury. At a certain management level they were entranced by the atmosphere – and money – generated by Arsenal’s Champions League games at Wembley in 1998 and 1999.

Highbury was Arsenal’s home, it meant something. The benefits of leaving it were meant to be seen in the transfer market and on the pitch by now. They haven’t been; they are seen in the bank.

It is time for big questions at Arsenal – and for Wenger. Held at arm’s length by Barcelona on Tuesday, unable to finish in the top two in the league since 2005, another is whether leaving Highbury has been justified.

Looking back just four years, however, and what is immediate is the turnover of players.

As the clubs prepare to meet in the competition’s final at Wembley tomorrow, of Liverpool’s 14 different starters in 2012 only two are left: Martin Skrtel and Jordan Henderson.

The likes of Craig Bellamy, Andy Carroll and Jay Spearing have gone.

Used subs such as Charlie Adam, Jamie Carragher and Martin Kelly have also moved on. And, of course, there is no Steven Gerrard. And the manager back then was one Kenny Dalglish.

However, of City’s 16 starters over the two legs, seven are left. You could build a team around Hart, Zabaleta, Kolarov, Clichy, Nasri, Silva and Agüero.

If continuity of personnel counts for anything, City should win on Sunday.

But then one of the results of the Premier League season was Liverpool’s 4-1 win at City in November, and Hart, Kolarov and Agüero started that.

Manuel Pellegrini’s team selection will again attract intrigue, particularly as the teams meet on Wednesday at Anfield in the league.

One of them will be under pressure to retaliate.