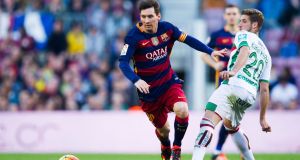 When Michael Owen won the Ballon d’Or in 2001, becoming the first and still the only Englishman to win European football’s player of the year award since Kevin Keegan, his manager had to take him aside and impress upon him just how important this was. “Gerard Houllier was surprised when he first told me,” Owen admitted. “I think he was a bit put out by me not punching the air and going hysterical. He was saying: ‘Do you realise what this means?’”

Had Owen seen what was going on in Spain, he would have done: in Madrid they were loudly decrying the injustice of it all, the cheek of this Englishman who had taken what was “rightfully” Raul’s. They still do, in fact. Here it was an obsession, front page almost daily. “It’s a massive thing, but it’s not big in England,” Owen said. “In England, it gets a little column on the back page telling you who has won it, if you’re lucky.”

Fifteen years on, things have changed. Presented by James Nesbitt, tonight’s gala - at which there will also be a presidential award but no president - will be shown live by Sky and Eurosport. Some people might even watch it; they’ll certainly argue over it. It is hard to imagine an English winner admitting some time after the event, as Owen did: “Since then, I’ve realised what it means. It’s one of the best individual awards.” Since then? One of them?

It is hard to imagine an English winner at all, of course, and this still feels like a Spanish thing - even if, like La Liga, it attracts greater attention than ever before. For the past six years the winner has been someone playing in Spain. This year’s winner will be a player from La Liga too: Leo Messi, Cristiano Ronaldo or Neymar.

“Spain” is probably too broad a category here. Since 1997 only two winners of the Ballon d’Or - Pavel Nedved and Andriy Shevchenko - have not either been playing in Spain or ended up playing there.

In every case, their club was Real Madrid or Barcelona. And over the past seven years, the category could be reduced again. Leo Messi and Cristiano Ronaldo have finished first and second every year for four years and in six of the past seven years, albeit in 2008 Ronaldo was still at Manchester United.

Ronaldo in 2008, followed by Messi for the next four years, then Ronaldo again in 2013 and 2014: these men have dominated an era like none before, the Madrid-Barca rivalry expressed through its two greatest players, with the golden ball acting as some kind of ultimate arbiter. Not that it is an unchallenged one; complaints and conspiracy theories still abound.

If there are echoes of Juanma Lillo’s comment about the garnish eating the steak - brilliant performances in decisive games and trophies won presented as evidence towards a Ballon d’Or candidacy as much as an end in themselves, and players elevated over teams - it is still an extraordinary run from two players to be celebrated, if only people could stop getting so angry about them.

There is a chance that tonight the run will be broken, though. Perhaps even for good. This year it seemed possible that the three candidates might not just come from the same country but, like in 2010, from the same club. That year, Spain’s World Cup win brought Andres Iniesta and Xavi to the podium alongside Messi; this year, Barcelona’s treble might have also elevated Neymar and Luis Suarez - all the more so if the award is judged on 2015, the calendar year, not just the last season.

Between them, Messi, Neymar and Suarez won it all and scored 180 goals in 2015, more than any forward line has ever scored and the spread was remarkably even, the contributions consistent from all three men in an historic 12 months.

Suarez did not make it. Rarely can so strong a candidate have been left out, a treble winner with a goal in the European Cup final, five goals in two games to take Barcelona to the Club World Cup, currently top scorer in La Liga. But, unlike in the Uefa award where he made the top three, Ronaldo and Neymar are included ahead of him.

There may be an element of inertia there, the one-two of this era an automatic choice, a sense that voting for Ronaldo is just what you do; that the only doubt in any world player list is, by definition, the third man - and that there the choice is Suarez or Neymar but not both. There will be a recognition that it is hardly Ronaldo’s fault that his team has won nothing. If 2015 has been difficult, the fact that it is possible to talk of “decline” for a player who scored more than 50 goals for a fifth consecutive year shows how absurdly high he sets the bar.

Even after a campaign that ended empty-handed it is natural that most believe that the man who won the last two awards still stands above all except Messi, but that assumption perhaps faces its firmest challenge for years in Zurich and the next question may be if it is a one-off. Neymar makes a strong case - and at 23, he will make more. Ronaldo turns 31 next month, has fought pain in his knee, and questions about his future persist, so it is natural that some ask if this year may be the last time that he and Messi stand one and two.

If Ronaldo was to finish outside the top two, it would be the first time in five years. More likely is that he will finish second and, as ever, will be far from satisfied, determined to return and regain the trophy, as he did when he ended Messi’s unique four-year run. But that there is even a doubt is significant. For second place, that is. When it comes to first, the only doubt is what suit Messi will wear. Guardian Service

Man City’s Abu Dhabi owners not the sort to back down over ban 10:51
Pints and sports events; England ready to show their best 07:30
Frank Lampard says Harry Maguire should have been sent off 06:36
Willie Mullins prefers to ‘keep it simple’ and run Benie in Mares Hurdle 06:00
Stopping Jonny May’s pace must be high in Ireland’s priorities 07:14

1 Gerry Thornley: England primed to show their best against Ireland
2 Should fans be allowed drink in the stand at sporting events?
3 Man City’s Abu Dhabi owners not the sort to back down over ban
4 Stopping Jonny May’s pace must be high in Ireland’s priorities
5 Frank Lampard says Harry Maguire should have been sent off
Real news has value SUBSCRIBE
Crossword Get access to over 6,000 interactive crosswords