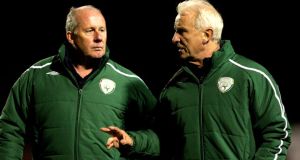 Sporting life is a funny old thing: the highs stratospheric, the lows subterranean. Take Bobby Zamora. Time was he was serenaded, to the tune of That’s Amore, by crowds the length and breadth of England with: “When you’re sat in row Z and the ball hits your head, that’s Zamora”.

But on Saturday he was being likened to a footballing deity, Ruud Gullit declaring him to be “our Messi” on Match of the Day after his tasty goal against West Brom.

But you couldn’t but feel for Bobby: he was like a man who had broken the 100m world record only for it to be smashed again – and again – while he was still on his victory lap, his effort looking like a tap-in next to some of the weekend’s goals. There was something in the Premier League water.

Well, he certainly has a grá for Liam Brady, as he told us when he appeared on Second Captains last week, recalling the awe and dropped jaws when the Chippy man used to stroll in to the Irish dressing room from his Italian Job.

(Before Brady made his appearance on the show, Niall and Richie Sadlier talked of the difficulties of life after retiring from football, how they missed the camaraderie, the routine, the banter, the thrill of the games, all that. A difficult time, so you’d want to be sensitive chatting to sports people for whom retirement looms.)

Ted Walsh: “Well AP, as Frank Sinatra says, the end is near, the final curtain. What’s it feel like?”

Anyway, the chat with Brady was rather excellent, not least his account of deciding to leave Arsenal after nine years to give life in Italy a go.

Arsenal secretary Ken Friar [trying to persuade him to stay ay Highbury]: “But you’re going to a foreign country!”

And when he got to Juventus he talked of the efforts by everyone at the club to make him feel at home, the only blip being when the stereo in his apartment wouldn’t work. Knock, knock, repair man at the door. The gaffer, Giovanni Trapattoni. No, really. Brady still recalls him lying on the floor fiddling with wires to fix the problem. Legend.

Brady had, of course, a less loving relationship with Jack Charlton, but he insisted he wasn’t the type to bear grudges and was happy to let bygones be bygones. And then it was time for him to remove someone from the Good Wall, featuring the special guests’ chosen top 10 greatest Irish sports people.

“I’ll take out the fella from Cork,” he said, and with that Roy Keane was in the bin.

“Oooooooh,” said the audience. (Some grudges have yet to be bygoned).

You lost lifelong friends over the Good Wall too? We’re a hoot.

1 Colin Kaepernick’s exile is too fresh for NFL to speak out on US protests
2 Fitzgerald says inter-county game should resume before club fare
3 Aboriginal icon fights for moment free from the weight of history
4 RWC #42: Andrew Sheridan destroys Australia’s frontrow
5 Sonia O’Sullivan: How to keep your competitive edge from going blunt
Real news has value SUBSCRIBE
Crossword Get access to over 6,000 interactive crosswords