Manchester United given the run-around by Dortmund in China 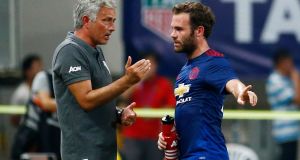 As the arch-winner José Mourinho will be disappointed at this defeat, though a game played in stifling heat was never really about the result.

The Manchester United manager had stated beforehand that the priority was for his new team to start the process of gelling, with zero focus on the opposition. So this opening International Champions Cup was, in part, an exercise in searching for hints regarding the Portuguese’s thinking.

Was there anything, then, in Antonio Valencia being asked to captain the XI and not, say, Juan Mata? Or the latter being positioned at No10 and Henrikh Mkhitaryan, who was in that role against Wigan Athletic, being on the left? Or Daley Blind, a centre-back for most of last term, playing in midfield? Maybe, maybe not: to guess would be tantamount to tea leaf reading at this nascent stage of Mourinho’s tenure.

What is clear is the quality Mkhitaryan possesses. It was displayed on Saturday at Wigan and the way the 27-year-old pinged one early pass down his corridor showed again why Mourinho bought him.

There was further slick stuff when Ander Herrera found Mata and he flipped the ball beyond the German defence into Memphis Depay. Operating as the centre-forward, the Dutch attacker was smart enough to glance infield as he ran on and though his pass inside was blocked this was the right play.

The bright start was halted when Thomas Tuchel’s side went ahead. Sam Johnstone might have done better with the speculative 30-yard free-kick hit by Pierre Emerick Aubameyang. Instead it was spilled, Ousmane Dembelé hit one follow-up attemptt beat out by the goalkeeper from close in, but when the ball finally fell to Gonzalo Castro he finished.

From here the contest meandered for a while on Shanghai night becoming ever the more sultry. Mourinho had pointed out that Dortmund were well advanced of United in their preparations, having played five matches already, and it showed. Tuchel’s men were sharper and stronger and by the 35th-minute were 2-0 ahead.

United were breached down their left, and when a cross came in Aubameyang’s overhead kick was mishit, Valencia handled and the referee, Wang Di, awarded the penalty. Aubameyang slotted this easily past Johnstone, who went right and saw the ball go past him down the middle.

Aubameyang was running United ragged whenever the ball came near him. He slipped beyond Phil Jones and appeared to have chipped Johnstone but the keeper recovered and made the save. By the end of the half Mourinho had switched Mkhitaryan and Lingard but the Portuguese, standing in the technical box, was witnessing a mismatch.

For the second half off went Jones, Lingard, Johnstone and Depay as Sergio Romero became the new keeper, and he was joined in the contest by Marcos Rojo, Ashley Young, and Marcus Rashford. The latter’s introduction received a cheer from the crowd and the young forward was instantly involved in a United move, turning the ball into Luke Shaw’s path. The left-back was clear and had Young for support but he overran possession and the danger fizzled out.

Rojo’s first act before his new manager was hardly impressive, as he was fooled by Dembelé before the Dortmund No7 made it 3-0.

United’s shape had become fluid; Rashford and Mkhitaryan switching at times between the left-forward and No9 berths. It was from through the middle the Armenia captain pulled one back, tapping home a Mata pass after lurking near the penalty spot.

By the close Adnan Januzaj and Andreas Pereira were on for Valencia and Blind. Januzaj sparkled here and there but, as Castro added his second and Dortmund’s fourth towards the end, the Belgian’s intermittent threat could be viewed as the United display in microcosm.