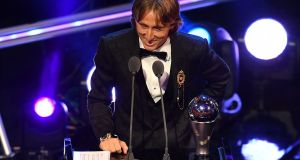 Real Madrid’s Croatia midfielder Luka Modric was named Fifa Men’s Player of the Year for 2018 at an awards ceremony on Monday.

Modric won the Champions League with Real and then played a major role in Croatia’s run to the World Cup final where they were beaten by France.

Modric beat Mohamed Salah and Cristiano Ronaldo to the award.

For the 33-year-old midfielder, the prize caps a remarkable 12 months which saw him play an integral role in Real Madrid’s third straight Champions League victory and then lead Croatia to their first ever World Cup final.

In his speech, the former Spurs maestro thanked his teammates and family in English, Spanish and Croatian, and said he was proud to receive this prize in front of Fifa’s deputy general secretary Zvonimir Boban, a star of Croatia’s 1998 World Cup side.

Modric’s win breaks the Lionel Messi-Ronaldo duopoly of the last 10 years and it follows his player of the tournament prize at Russia 2018 and Uefa player of the year accolade last month.

“It’s a great honour and a beautiful feeling to stand here with this amazing trophy,” he said.

“First of all, I would like to give congratulations to Mohamed [Salah] and Cristiano [Ronaldo] for the great season that they’ve had and I’m sure in the future they will have another opportunity to fight for this trophy.

“This trophy is not just mine, it’s for all my Real Madrid team-mates, for all my team-mates from the Croatia national team, for all the coaches that I have played for.

“Without them, this would not be possible and thank you a lot to them. This trophy is also for my family, without whom I would not be the player and person that I am. They are my ‘the best’.”

“At this particular moment, I would like to mention my footballing idol [Zvonimir Boban] and captain of Croatia generation 1998 and their first participation [at the World Cup finals as Croatia] and bronze in France,” Modric said.

“He was my big inspiration and that team gave us belief that we could achieve something great in Russia. Hopefully we can be the same for next generations.

“This award shows that we all can become the best with hard work, dedication and belief. All dreams can come true.”

France’s World Cup winning coach, Didier Deschamps, was named coach of the year and Salah won the Puskás award for the year’s best goal, for his strike against Everton in December.