Kylie Murphy: ‘We know there’s always more, we push each other over the line’ 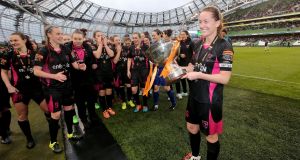 Wexford Youths’ Kylie Murphy with the FAI Continental Tyres Women’s Cup, one of three titles claimed by the side. Photograph: Ryan Byrne/Inpho

Carlow native Kylie Murphy is captain of the Wexford Youths side that last weekend completed a season’s treble, beating Shelbourne in a playoff to retain their National League title, adding to their successes in the WFAI Cup and WNL Shield. The team will once again represent Ireland in the Champions League qualifiers later in the summer. Murphy’s personal success is all the more remarkable considering she was told just a few years ago that a back injury meant her football days were over.

Are you still celebrating?
Well, at 27 I’m a bit older than most of the rest of the girls, so I couldn’t keep going as long. What a season you had, three trophies in the cabinet. It’s just been fantastic, the League was the big one, and winning it the way we did in the playoff, well, you couldn’t write it. We were five points ahead at one stage so you have to give credit to Shels, they put up some fight, they kept us on our toes ‘til the very last minute. We were a goal down last Sunday but we never let our heads drop.That’s the Wexford mentality, we don’t ever give up. It was the same in the cup final [against Shelbourne last November] when we equalised in the 95th minute, we’re never beaten. We know there’s always more in each other, we push each other over the line.


How is the League progressing?
Well, Castlebar dropped out of it this season so it went back down to seven, but there’s talk of IT Sligo coming in to it next year, which would be great. If we could just get a couple of more teams competing and starting to challenge that would be fantastic, at the moment there’s probably only three or four. Galway came good this season, they were going very well, until they lost Savannah McCarthy to Glasgow, they were top of the league. You’d be hoping to see the clubs that finished lower in the league to build a little more. I don’t enjoy going out beating teams 10-0 or whatever, it’s no good for anyone, it’s not nice and saps your confidence.


The league has lost a lot of its top players, like McCarthy, to clubs abroad, how damaging is that?
It’s not going to be any time soon but maybe down the line those players won’t feel they have to leave, that the structures are set up here for them, but you could never begrudge them for going, every player wants to get the best out of themselves. And it’s fantastic seeing the Irish girls flying the flag and representing us in the top leagues around the world. It’s brilliant.

You had a bad back injury a few years ago?
I did, in my very first season with Wexford Youths, I slipped a disc in my back and it put me out for a little over a year. The surgeon said I’d never play soccer again, but that was not acceptable to me. It was a lot of hard work, I was up and down to Wexford from Carlow five days a week for rehab, but I couldn’t get by, I had to have surgery – and that was probably the best thing I’ve ever done. The disc was sitting on a nerve and the pain was shooting down my leg. It was hard coming back from that, but it was well worth it.

Could you not imagine life without football?
Even now I think that way. I don’t know how I’m going to be able to walk away when the time comes in a few years. Football just comes first over everything for me, but that’s what you have to put in and all the girls do it, it’s what has us where we are now.

And combining all that with a full-time job?
But I’m lucky enough, I work in my Dad’s business in Carlow doing carpentry, making kitchens. I only started about a year and a half ago and I absolutely love it. Building kitchens bit by bit. Learning off my father and brother has been just amazing.

So if you ever run out of space for all those trophies, you can build a cabinet?
Exactly! But there’s loads of room yet.