Johan Cruyff transformed Barca not once but twice 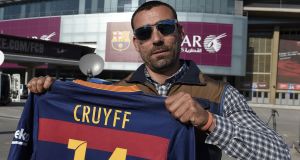 A fan poses with a jersey of late football legend Johan Cruyff outside the Camp Nou stadium in Barcelona yesterday following the death of the Dutch footballer. Photograph: Lluis Genelluis/AFP/Getty

“Johan Cruyff was not scared of anything,” Txiki Begiristain recalls. The Dutchman’s players, on the other hand, were. At least to begin with, before he took them beyond fear.

“When there are doubts, people tend to seek safety in numbers, to go with the herd,” Begiristain, the former Barcelona winger, says.

“Not Cruyff. His first solution was always to be more attacking, more expansive. Three at the back and the centre-back is Ronald Koeman? Instead of full-backs, midfielders? Every time he sought a solution, he attacked more. And when he told us what he was doing, we thought: ‘Is he mad or what?’”

How, then, did the coach persuade them? Begiristain laughs. “Because he is Johan Cruyff!”

And Johan Cruyff is everything. There may be no man who has influenced modern football like Cruyff; at Barcelona there certainly isn’t.

There he became the defender of a footballing faith, a deity, the man who revolutionised the club, not once but twice, and forever; more important even than Begiristain and his team-mates could have imagined on his second coming. Cruyff gave Barcelona a new identity and a new, sporting discourse that complimented and deepened the socio-political situation he came to understand and embrace so well; came to embody, in fact.

Before 1990 Barcelona had won 10 league titles in their entire history and no European Cups; since then they have won 13 leagues and five European Cups. But it is not about the trophies, or not only; it goes beyond that, to philosophy and identity. Winning, sure; a way of winning too.

“Nothing in football would be possible without the arrival and the unequalled charisma and talent of Johan Cruyff,” Pep Guardiola says.

“I’m never afraid of making mistakes and I tried to bring that idea to the pitch,” Cruyff said. “I told players not to be afraid: ‘If you have an idea, good: try it. And if it goes wrong, don’t worry.’” He had practised what he preached.

Cruyff, who was three times a European champion, the best player on the planet, the most talented representative of Dutch Total Football, could have signed for Real Madrid but he did not. In part because Ajax had sold him to Real Madrid.

“That’s unethical. I said: ‘I decide,’” he recalled. He threatened to retire unless he was allowed to join Barcelona, where he knew Vic Buckingham and Rinus Michels and to whom he had already given his word. He became the most expensive player in the world but it was the best investment Barcelona ever made.

The ban on foreign players finally lifted, Cruyff eventually made his debut against Granada in October 1973. Barcelona were fourth from bottom, having won only two of their seven league games, and were already out of the Uefa Cup. One magazine cover showed the new signing in flares and a striped jumper, huge shirt collar, jacket draped coolly over his shoulder. “Cruyff: the only hope to avoid the chaos,” the headline declared.

They were right. “We had gone 14 years without winning the league and cules had started to despair,” his team-mate Charly Rexach recalls. “And then Cruyff arrived.”

At the end of the season, Barcelona were champions for the first time since 1960. They had not lost a match that mattered with him in the side, going 22 unbeaten before losing twice after the title had been clinched. It was, as it turned out, the only league title he won as a player but if that is a surprising limited return in terms of silverware, the impact now looks almost limitless – particularly when Cruyff the player is recalled alongside Cruyff the manager. When he is just Cruyff.

“Cruyff was a sensational player,” says his former team-mate Juan Manuel Asensi. “He was also a winner. The change in mentality was brutal. It was like we had been drowning and now we were pulled out of the water.”

He knew what he wanted; the style was defined, one he remained faithful to as a coach as well as a player. Rexach says the change in footballing terms when he came in 1973 was “radical, a revolution”. He explains: “Back then football was: ‘Right, out we go: come on lads, in hard’ and that was it. No one studied the opponents. It was fight, run, jump. Then it was: ‘No, let’s play better football.’”

Cruyff was contagious, representing a radical shift at Barca, and not just on the pitch. As Asensi puts it: “With Cruyff, everything changed – the club as well as the team.” He defied convention, at every level; this was not only sport, it was society.”

When Cruyff took over as manager in 1988, Barcelona were a club in debt and in crisis. Results were bad, performances were worse, the atmosphere terrible and attendances down. It did not work immediately but he recovered the identity he had embodied as a player.

Under Cruyff, Barcelona won four league titles in a row. They also won the European Cup at last, against Sampdoria at Wembley in May 1992.

Then assistant coach Rexach says winning the trophy was a “liberation”; their historic fatalism was finally defeated. “There were lots of people waiting for us to screw it up again,” adds Rexach, “and the feeling was [that] another life starts. We were released.”

As the players prepared for the biggest moment in FC Barcelona’s history, Cruyff famously had one last message to deliver: “Salid y disfrutad”. Go out there and enjoy it.

1 Solskjær praises Martial for building himself into ‘powerhouse’ centre forward
2 No final round heroics for Rory McIlroy at US PGA
3 Sporting Cathedrals: Semple Stadium, the very centre of the hurling universe
4 Liverpool to sign Olympiakos left back Kostas Tsimikas
5 Ronnie O’Sullivan beats Ding to reach Crucible last eight
Real news has value SUBSCRIBE
Crossword Get access to over 6,000 interactive crosswords