Joanne O’Riordan: Aluko and Scott at the vanguard of punditry revolution 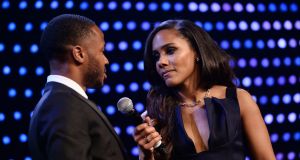 My favourite show growing up was Goals on Sunday. Every Sunday, after coming home from mass, I would spend my morning watching the incredibly relaxed, blasé, perfect Sunday breakfast show. Goals on Sunday, in my opinion, was different. It was a friendly yet engaging round up of all the goals from the previous day’s action with guests you didn’t think would be interesting.

I remember when I saw Marcelo ‘El Loco’ Bielsa for the first time on the show and finding him enthralling with his deep thinking of the game. Ian Wright and Jermaine Defoe blew my mind, even more when they were asked about movement in the box, striking partnerships and everything you needed to know to be a top goal scorer.

Analysis these days is different. It is definitely more emotive and designed to enrage the Twitterati who gather around like a ravenous Doberman waiting to pounce on any perceived insult towards their favourite team. But now, more than ever, we are seeing the introduction of female pundits.

Over the weekend on BBC’s Match of the Day, Alex Scott was vocal about the daily abuse she gets just because she’s a pundit. For those of you who are unaware, Scott and her England teammate Eni Aluko became breakout stars for their analysis during the World Cup on BBC and ITV. It shouldn’t be a surprise that the former England internationals and domestic champions knew their football, but to some (Patrice Evra even clapped Aluko for knowing her stuff) it was still a surprise. To others, it was the worst decision to have ever been made regarding football analysis.

Ireland did its bit during that same World Cup, RTÉ managing to bring in Hope Solo, former US goalkeeper and double Olympic and World Champion, Louise Quinn, Irish international and now domestic league winner, as well as Stephanie Roche, former Puskás nominee and fellow Irish international. Again, people were surprised, some for the better, while others could not understand why females were allowed to commentate on the men’s game. To quote my brother, the knuckle-dragging minority.

Now, as PC goes mad once again and as gender quotas ruin lives, RTÉ finds itself in the firing line because of Joanne Cantwell and Ursula Jacob, the two-time All Ireland winner with Wexford. I personally have no idea what these women did wrong. Was Cantwell too eager to shut down the Brolly ranting mania? Definitely not. Is Jacob really out of her depth when giving analysis to the real game of hurling rather than camogie? Two All-Ireland’s and four All-Stars indicate to me she’s ideal for analysing both codes.

But yet, these issues arise more and more as female analysts, hosts, journalists and those working in the media are being introduced to the forefront of mainstream media. Obviously gender dynamics are in play and I’m a firm believer that sport is a reflection of society. Sometimes, we become so used to women in a particular role that when that space begins to shift, then we have some problems.

But here’s another issue: what sort of sports analysis are we genuinely looking for? Scott, Aluko and many others are often praised for their refreshing knowledge when they actually focus in on the game. I’m old enough to remember when Gary Neville first came around in 2012, and he was hailed for precisely what the female pundits are doing. Tony Romo has also emerged as a new fans’ favourite for his enthusiasm and knowledge and the way he has changed how co-commentary works - rather than going through old plays, try and predict the next one.

A few seasons back when Slaven Bilic was on Match of The Day he was so engaging. He made some excellent points about the football tactics but he was just great to watch and great to listen to, his passion was so evident.

Punditry, just like everything these days, is evolving rapidly and sports analysis, while getting more high tech, is slowly losing the enlightenment and information necessary for it to survive. I could go to my local pub and watch a re-enactment of Roy Keane and Gary Neville while also listen to people talk to me about puke football and how the hand pass is ruining Gaelic football.

When I turn on my TV or my radio I don’t want the same old jaded male-dominated fare. I don’t want to be bored by the same old rants time and time again and the same basic soundbites that are begging to be used in a highlight reel. I want to hear enthusiastic, well-informed views that clearly stem from a well thought out process. And it’s not just me, all fans want to the same thing.

That’s what’s really lacking in my eyes. There’s a dearth of pundits who really care. Mostly they’re on to fulfil a role (tactics or looking disapproving) and pick up the headlines or paycheques along the way.