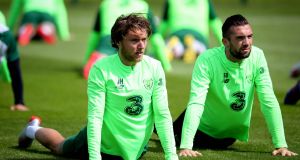 Jeff Hendrick believes that his Irish international teammate Shane Duffy will make a big impact in Scotland where his commitment to the cause will, he believes, go down well with the Celtic fans.

The Scottish Premiership side confirmed the signing of the 28 year-old central defender on a season long loan on Wednesday morning and Hendrick reckons it could mark the start of a really special year for the central defender.

“He gives everything to the team and they’re the sort of fans up there that that’s what they want to see. And they’re looking to do the 10 in a row, so it could be something special for him.”

Duffy looks to be a certain starter for Ireland in Sofia on Thursday evening but their manager Stephen Kenny has quite a few options to work with in midfield where the availability of both James McCarthy and Robbie Brady opens the prospects of restoring a line-up that worked well when they played together under Martin O’Neil at Euro 2016 but which has rarely been seen together since because of injuries.

“Yeah, it worked really well four years ago, I think,” says Hendrick. “It’s not nice that we got only one chance to play together again because the lads had tough times for injuries. But they are both back fit now.

“Obviously there are other good players as well for those positions but I think it’s brilliant to have Robbie back, and to have James back, you know; I really enjoy playing with James in the games that I have. I think it’s a great player. He’s just been unlucky with a lot of injuries.”