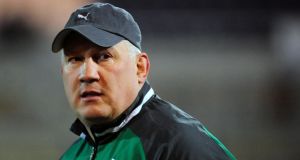 Mike Ruddock: “We must take our chances when they come along and although we did well to draw with Italy last year we would be confident that at Dubarry Park we can get the desired result.” Photo: Chris Vaughan /Inpho

Irish captain Dan Leavy has been ruled out of the remainder of the tournament with a shoulder injury and will be replaced in the backrow by Buccaneers flanker Rory Moloney.

However influential number eight, Jack O’Donoghue, who missed the defeat by England with concussion, is back after observing the return to play protocols. Seán O’Brien takes over the captain’s role.

There are two changes on the bench with Stephen Gardiner replacing Joe Joyce and Frankie Taggart, who started against England dropping down to the exclusion of Michael Trigg.

Ruddock said: “The end result against England did not reflect the effort and endeavour shown by this Irish side at Franklin’s Garden. We must take our chances when they come along and although we did well to draw with Italy last year we would be confident that at Dubarry Park we can get the desired result.”

Ireland have suffered successive defeats to England last time out and prior to that a 16-0 loss to Wales in atrocious conditions at Dubarry Park.

Coincidentally the weather was pretty appalling at the Athlone venue for their win over Scotland.

Despite the couple of setbacks there is plenty to play for from an Irish context particularly for individuals as Ruddock surveys his resources ahead of the summer’s forthcoming IRB U-20 World Championship.

O’Donoghue’s return is a big plus, considering the absence of the excellent Leavy, as the UL Bohemian number eight was outstanding in that Scottish match before sustaining his concussion against Wales.