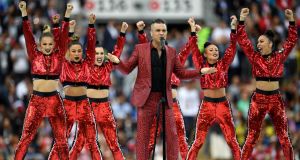 Robbie Williams performs during the opening ceremony of the World Cup ahead of the Group A match between Russia and Saudi Arabia at the Luzhniki Stadium in Moscow, Russia. Photograph: Matthias Hangst/Getty Images

Aaaaaaand: We’re off. We have ourselves a month of pure footballing bliss ahead of us, although it may take that long to come to terms with ITV’s World Cup studio which overlooks St Basil’s in Red Square, but makes the cathedral look as architecturally ambitious as, say, the Liffey Valley Shopping Centre.

The ITV panel, hosted by Mark Pougatch, could have been giving us the winning numbers for the next EuroMillions draw but we wouldn’t have heard them, so hypnotised were we by a studio whose designer is now in danger of being hired by Donald Trump to look after the Oval Office make-over.

At one point, while Ian ‘Wrightie’ Wright (on loan from the BBC) was addressing Gary ‘Nev’ Neville (on loan from Sky Sports), a giant lava lamp type thing, inserted in the studio wall over his shoulder, began gyrating, casting Technicolor shadows over a floor created by someone who’d just eaten a bowl of magic mushrooms. From on high, meanwhile, Maradona, Pele, Zidane and Cruyff, their faces embedded in virtual pillars, looked down upon the panel, and the whirring you could hear was John Logie Baird spinning in his grave.

You wondered at this point if you used 3D glasses would Geoff Hurst fall from the ceiling of the studio and land in your living room, offering you a cup of tea and a Hobnob.

Russia were 4-0 up by the time we regained our focus.

RTÉ’s studio, in Montrose rather than Moscow, was infinitely kinder on the eye, although Darragh Maloney’s excitement about the impending start of the World Cup was soon knocked out of him when Liamo, Eamo and the Duffer focused on everything that could possibly go wrong over the next month.

Eamon, not unreasonably, called attention to “repulsive regimes” being awarded the hosting rights to World Cups, although when he included Germany in the list, he guaranteed a call from their embassy in the morning. Helmut Schmidt and Angela Merkel were the country’s gaffers when they had the tournament on home soil. And not Adolf Hitler. That would have been the Berlin Olympics in 1936.

The 2018 FIFA World Cup kicks off in Russia VIEW NOW

Any way, the mood was decidedly downbeat on RTÉ, the Duffer praying that Russia would get through their group because “it might keep the hooliganism at bay, for a couple of weeks any way”; Eamo was forecasting a “train wreck” of a tournament for the hosts; while back on ITV Jacqui Oatley previewed the nation’s month by saying “they’re looking to avoid becoming the worst host nation in the history of the World Cup”.

This was all a bit gloomy. A reminder of the experience earlier in the day tuning in to Russia Today where their crew was based on top of the Four Seasons hotel in Moscow. “We’ll bring you the best of the . . . atmosphere,” promised Colin Bray. Not games, atmosphere. But in fairness, they did just that, the channel having reporters situated in every town and hamlet in the country, all of them so giddy they sounded a little like those Eurovision Song Contest people who announce, say, the results from the Moldovan jury.

Like Aleksey Yaroshevsky who brought us, as he described it himself, a “high energy” report from Moscow where he asked visiting fans to sing tunes for him. They all co-operated quite well, especially the Egyptian “Mo Salah running down the wing” people, although the Colombians welcomed Aleksey’s intrusive microphone much like it was a dentist’s drill.

It was, though, generally upbeat fare, until Nadira Tudor’s piece on the father of Russian football, Scottish shipyard-owning magnate Arthur MacPherson. What thanks did Arthur get for organising and promoting the game in Russia? “The life of Arthur ended miserably due to his prominence and position in the Russian empire. He was imprisoned by the Bolsheviks and died of typhoid in jail in 1919. It’s unknown where his body was buried.”

Well, that was an uplifting story, thanks RT.

At least their co-host Peter Schmeichel tried to raise spirits: “What is the atmosphere like there now at the Luzhniki Stadium?”

Aleksey: “It’s definitely much louder than when you and me came here two weeks ago!”

(That would have been when no one was there).

The star of RT’s show, incidentally, is Jose Mourinho, the poor lad having to supplement his miserly income by appearing occasionally on the roof of the Four Seasons, the channel so excited about him being on their team they even show clips of him having his make-up put on before he makes it up to the roof.

Schmeichel, though, is the real star of the show. “The game is really 90 minutes. I know it’s a cliché to say that, but it really is 90 minutes”

RT man Andrew Farmer nodded like he’d just had the theory of evolution explained to him.

The opening ceremony. The lest said. “Take that Moscow,” cried George Hamilton as Robbie Williams departed the scene. In time we’ll forgive him.

Meanwhile, the train wreck won 5-0. If they stay on track Arthur MacPherson will rest in peace. Wherever that might be.