Penalty miss and semi-final heartbreak all too familiar for England 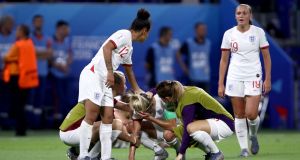 The scourge of missed penalties at a major tournament returned to haunt England last night as their dizzying progress at this Women’s World Cup came to a painful – and familiar – end in the semi-finals. As the United States celebrated their 2-1 victory, England’s captain Steph Houghton trudged off the pitch, alone in a stadium of 53,000 spectators, having missed an 83rd minute spot-kick to equalise.

It was an instant classic, although that will come as cold comfort to England’s players, who went out of a major tournament in the semi-finals for a third time in a row despite throwing everything at their opponents in a desperately exciting final 30 minutes.

Several England players were also crying afterwards, but their manager Phil Neville insisted there should be no tears or recriminations. “We have no regrets,” he said. “We’ve had the best 46 days of our lives… We have come to the Women’s World Cup and given it our all.”

No one could doubt that. The first half oozed skill and was played at a pace that took the breath away. The second was laced with tension and a testiness that eventually boiled over when England’s Millie Bright was sent off after stamping on US captain Alex Morgan. The Americans were deserved victors, but they were hanging on a desperate finale.

There can’t be many sneerers or sceptics when it comes women’s game after these extraordinary last few weeks in France. This match, surely, would have converted the remaining holdouts into believers.

And this revolution has been televised. An incredible 7.9m watched England’s match against Norway last week. Over 10 million were expected to have tuned in to see them play the US – making it the most watched British sporting event of the year. As Alicia Willmore, who travelled from Basingstoke to watch the game, put it. “I’ve really noticed the changing in attitude back home. It’s gone from ‘Oh god, women’s football’ to ‘Wow, this is great’. This Women’s World Cup has been a game changer.”

England had won all five of their matches going into this semi-final. But they were immediately on the back foot as the US team, the No1 ranked side in the world, went ahead after nine minutes through Christen Press.

Soon chants of U-S-A, U-S-A began to bellow around the Stade de Lyon as the Americans pressed for a second. On the morning of the match, the local newspaper, Le Progres, had claimed that 20,000 US fans had flooded into the city for the semi-final. Walking around town you could believe it. They flooded coffee shops and cafes – and no one in stars and stripes was expecting to be eating humble pie.

Caitlin Edberg from North Carolina, was one of many supporters who predicted that US team would win ‘The Tour de Four’ – after winning three previous World Cups. “The Americans like winners and this team does it better than most,” she told the Guardian. One of her friends then denied the team was arrogant. “We’re not – we just don’t lose,” he said.

England hit back through Ellen White to equalise. Yet America responded again when their captain Alex Morgan celebrated her 30th birthday by scoring what turned out the winner. As she pretended to drink a cup of tea, the US fans serenaded her by singing Happy Birthday.

At that stage the US were dominating but as they sat back, England started to find much more joy in attack. Twice they seemed certain to equalise. First when White put the ball into the net only for it to be ruled out after a video review. Then when White was adjudged to have been fouled in the penalty area – only for Houghton to cuff a daisy-cutter that was too close to the American keeper Alyssa Naeher, who made a simple save.

England’s inability to find the net from 12 yards had killed them, just like it has so many times in the past.

Afterwards Neville urged his players not to be too downhearted. “We will learn how to win,” he insisted. “It doesn’t happen overnight but we will get there. That will inspire the kids to go out there and buy a pair of football boots. If we can keep replicating this euphoria and momentum we will be one of the best in the world.”

Of course there is still some way to go, especially when it comes to the bigger picture. Last season average attendances for the Woman’s Super League were under 1,000, after all. But on a day were Brexit party MEPs turned their backs in the European parliament on hearing Ode To Joy, Neville’s team have presented an alluring vision of a better England. One that embraces the thrill of the new rather than fall backs on ancient prejudices.

And while this defeat will fester for some time, England’s women have arguably done something more important than lifting a trophy. By winning over so many hearts and minds they have surely sowed the seeds for future glories. – Guardian