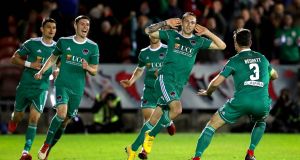 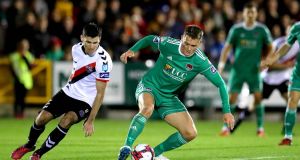 Two first-half goals proved enough for Cork City to keep their three-in-a-row FAI Cup hopes alive, but they had to withstand a late siege from Bohemians at Turner’s Cross.

Leading 2-0 at half-time, John Caulfield’s side were pegged back as Ian Morris scored a spectacular goal for Bohs just before the hour when he unleashed a left-foot drive from all of 40 yards. It was nervy from there but the Rebel Army did enough to set up a fourth straight final meeting with Dundalk next month.

Nine of the City team that began the drawn game at Dalymount Park were present, with Conor McCarthy in for the injured Steven Beattie and Graham Cummins restored in attack for Ronan Coughlan. On the other side, Bohs were without suspended pair Dan Casey and Daniel Kelly, with Rob Cornwall and Danny Grant in the side in their stead.

Not since the 7-0 quarter-final win at Longford on September 7th had City tasted victory, while the last league victory was at Waterford a month before that, but the performance from the home side belied any crisis of confidence as they tore into the game from the off.

The opening 15 minutes saw four home corners, with Cummins having headed over an early Kieran Sadlier cross, while Derek Pender had to get in a good challenge on Gearóid Morrissey on the edge of the area.

Bohs weren’t completely on the back foot – City goalkeeper Mark McNulty had been quick off his line to dive at Dinny Corcoran’s feet – but the Rebel Army were moving the ball at speed and with purpose.

Seán McLoughlin drew a save from Shane Supple following a Sadlier corner and then Karl Sheppard went close from another delivery by the winger before Jimmy Keohane’s deflected shot was held by Supple.

If a goal was to come, it looked like it would be for City and so it proved on the half-hour. When Shane Griffin sent a free kick goalwards from deep, McLoughlin flicked it on and Graham Cummins was on hand to send a diving header across Supple, to the delight of the home support.

While Pender did have the ball in the net in the wake of that, the whistle had gone and on 36 minutes City doubled their lead. Cummins provided the assist on this occasion, helping on McNulty’s clearance and Sheppard latched on to the ball before gliding past Supple and slotting home.

It was the first time since their win at Bray in late July that City had led a Premier Division team by two goals. While Bohs full back Darrgah Leahy – punished with the late equalising penalty in the drawn game – went down in the City area before half-time, Neil Doyle ignored his protests and it remained 2-0 at half-time.

On the resumption, City found it difficult to main the previous high tempo but they still looked comfortable until just before the hour. There didn’t appear to be much danger when Bohs defender Ian Morris picked up possession just inside the City half but he unleashed a missile towards the top corner. Though the ball hit the crossbar, bounced down and out and Corcoran’s follow-up was blocked, goal-line official Ben Connolly alerted Doyle to the fact that it had crossed the line.

JJ Lunney had a half-volley over the City bar in the wake of that, while Kevin Devaney drew a save from McNulty following Corcoran’s through ball. With the end in sight, things became nervier for the home faithful but Bohs were being restricted to long-range efforts, with Keith Ward and Kevin Devaney both firing over.

The five minutes of injury time saw Bohs throw everything at City but ultimately the hosts held out.