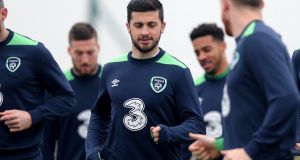 For Shane Long it took a few weeks for the gravity of the moment to hit home. While his Republic of Ireland team-mates celebrated defeating Germany thanks to his goal, the Southampton forward was called away to provide a mandatory drug test.

There was no time to reflect upon his magical finish past Manuel Neuer earning a win that guaranteed Martin O’Neill’s team a play-off tie for June’s European Championship and in which they defeated Bosnia-Herzegovina 3-1 on aggregate. By the time he got back to the changing room, his team-mates were at their hotel and the following morning they travelled to Poland. Getting a positive result in Warsaw was all that mattered for it would have guaranteed their automatic passage to France. Robert Lewandowski had possession of a different script though, taking the gloss off what must be Long’s career highlight.

“It was an amazing night but it was a shame we couldn’t go to Poland and top off what would have been an unbelievable week for Irish football,” Long says. “It will live in the memory but there are a few other moments – my first goal, scoring against England at Wembley. When it happened I didn’t know how to react. I was over the moon, buzzing.

“I didn’t really have time to take it all in then. It was over before I knew it but a few weeks after I looked back and enjoyed it for what it was then.”

A second chance to leave an impact at a European Championship is most welcome. Four years ago, during that disastrous Euro 2012 campaign under Giovanni Trapattoni where Ireland lost all three games, Long was restricted to two late appearances from the bench, against Croatia and Italy.

With the ageing Robbie Keane no longer moored in attack, Long appears the most likely first-choice in June for a frightful group stage featuring Belgium, Sweden and, once more, Italy. “I didn’t play as much as I would have liked out there [IN POLAND]. It was a nice experience going to the Euros but I had only 10 or 15 minutes on the pitch,” he says. “In this qualifying campaign I felt like I was a lot more involved. I scored a few goals and had a lot more game time. Hopefully I can make a bit of a difference out there. Getting out of the group is obviously the first aim and we will see from there.”

The player views the upcoming friendlies against Switzerland and Slovakia as an opportunity to impress Martin O’Neill – “hopefully I can stake my claim to start” – and concedes it is hard to ignore the impending jaunt to France despite having seven league games to go.

“It’s hard to get it out of the mind, obviously. The whole country is excited about it and I’m no different,” Long says. “But I am trying to concentrate on the club form at the minute. I am in good form and if I can keep that up coming into the summer it can only be good for Ireland.”

It could have worked out very differently for Long. Growing up he had enjoyed more success as a hurler – winning an All-Ireland minor title for Tipperary in 2003 – but was signed by Cork City as an 18-year-old. After a single league appearance he moved to Reading along with Kevin Doyle in 2005 for a joint fee of £92,000. The bulk of that sum was spent on Doyle, who remains on the Ireland periphery but is playing his club football in Colorado. O’Neill is understood not to care much for the standard in MLS.

After a slow start in Berkshire, Long’s coming-of-age season came in 2010-11, scoring 25 times after failing to reach double figures in the five previous campaigns. Successful spells at West Bromwich and Hull followed, with combined transfer fees totalling more than £20m. Although he has previously been urged to be greedier in front of goal, Long is four shy of a century in English football.

Long is unquestionably happy at St Mary’s despite a season of ups and downs. “I don’t think we are where we deserve to be in the league,” he says, but the style of football and Ronald Koeman’s trust in him to play in a series of roles have added further strings to his bow.

Admittedly Long, perhaps most renowned for his work ethic, is more comfortable in a central role, but he has also been featured on the left and right of a three-pronged attack. Rather than balk at being shifted about he is happy to be playing. “It is a bit of a headache for the gaffer having to choose between the options but it’s a headache I suppose he likes to have,” he says. “I am happy here at the moment because we’re playing good football.”

As for being stationed out wide: “It has added another dimension to my game and there is always a reason. Whether it’s a slow full-back or a full-back that likes to get forward that I can catch out on the break, there is always a method behind it. I am more comfortable playing up front but I will always do a job for the team, wherever the gaffer wants me to play.”

Hurling remains a passion and although some of his Southampton colleagues have paid an interest, none are willing to pick up a stick and have a puck around. “They have seen it on Sky and think it’s a fairly mental sport,” Long says. “They think it’s just madness, but I tell them I have had more injuries playing soccer than hurling. They like to watch it but don’t want to get involved.

“I have a few hurleys here. My brother is in Birmingham and I have a few friends around the UK, so when they come down we have a puck. My dog is useless though – he doesn’t chase the ball.”