Robbie Keane signs off Ireland duty doing what he does best 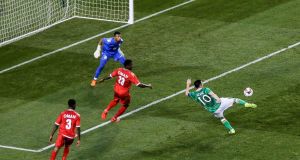 Robbie Keane scores the Republic of Ireland’s second goal in the friendly international against Oman at the Aviva Stadium. Photograph: Gary Carr/Inpho

You know that stuff they say about there being no such thing as easy international games anymore? Well, it turns out they are wrong. As Oman established here, there are still teams out there the likes of Ireland can coast past while barely breaking a sweat. On this particular night, it mattered little.

The crowd hadn’t come expecting a competition, far from it; they came to see Robbie Keane score before he scarpered and though the visitors obliged, they did, to be fair, just enough in the opening half an hour to keep the issue of whether he would or not exciting. Perhaps by then, they simply felt the home support had been kept waiting for long enough.

If Serbia rolled over as easily as this on Monday or if even the minnows in this qualification campaign could be expected to surrender quite so softly then Ireland, post-Keane, would not have to worry too much where the goals will come from.

That, though, is just wishful thinking and all those tight corners he got the team out of over his 18 years on the scene were loudly remembered as he made his exit, for the very last time, in the 58th minute.

Jon Walters and Robbie Brady, to be fair, provided some reassurance that they can continue where they left off in the last campaign with three goals between them but none were celebrated with anything like Keane’s, which the veteran striker took with a certain amount of panache after the other pair had linked up well to create the opportunity.

With O’Neill happy to hand a numerical advantage to the visitors in midfield, Harry Arter did well on the right of a three and Cyrus Christie had his moments as he overlapped down that side but it would have been hard not to have at least a couple of them on a night like this. 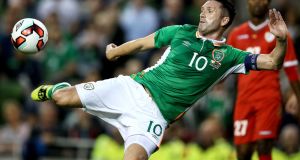 Gallery: A farewell to Robbie Keane

Oman strung some passes together on occasion without ever hurting their hosts and at the heart of the Irish defence, Marc Wilson and Ciaran Clark simply strolled through the evening.

Once Keane had got his goal, the second of the night, the atmosphere declined with the chatter around the ground revolving, perhaps, around the best of his other 67 for Ireland that those present had been lucky enough to see. Before it though, there was a genuine sense of fun about the place as the 36 year-old was willed on to score with every Ireland attack.

He came ever so close a couple of times and it became increasingly obvious that teeing him up was a priority for his fellow forwards. It was memorable when it came with the Dubliner, having looked a little over anxious once or twice before, taking it coolly over his marker as he turned before slamming it past Faiz Al Rushaidi from eight yards out. To the further delight of the crowd, the celebration included all of the old bells and whistles.

“I could feel that the whole crowd, the management and all of the other players wanted me to get that,” said the outgoing Irish skipper afterwards, “and I’m delighted to have scored one last goal.”

With Brady’s early free-kick into the top corner having given Ireland the lead and Walters’ header, from another Brady cross, having already put things far beyond doubt 11 minutes before the break, Ireland drifted through what remained of the game with nothing like the sort of urgency that would have been required to turn the occasion into a full scale rout.

With Aiden McGeady having skipped things in order to try to sort a move away from Everton, O’Neill gave extended run outs from the bench to Jeff Hendrick, James McClean and Stephen Ward with all three arriving on at half-time before Wes Hoolahan replaced Keane himself.

Darren Randolph arrived on for Keiren Westwood over the break as well although, to be fair, you would have to have been paying attention to notice what was happening that far down that end of the pitch.

Ireland, in any case, lost a little of their momentum and though they continued to dominate there was just one more goal with Walters getting his second after it appeared he had dragged an Arter through ball too wide. His shot, in the end, should have been stopped but Saad Al Mukhaini fluffed the block after doing well to get in the way.

Late on Hendrick was denied by a decent save but it overall it was easy, far too easy really, for a side who now face into a tough qualification campaign for the first time in two decades without their most prolific ever player. The real work starts after the weekend.