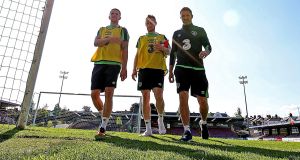 Republic of Ireland skipper Robbie Keane faces an anxious wait to see if he will make the Euro 2016 finals after being ruled out of the final warm-up game against Belarus through injury.

The 35-year-old forward could only watch his team-mates from the sidelines as they trained at Turner’s Cross in Cork on Monday evening ahead of Tuesday’s friendly clash after damaging a calf muscle on Saturday.

Keane, who did not play in the 1-1 draw with the Netherlands on Friday evening, had an injection to address the problem and would have been unable to train on Monday anyway as a result, but Martin O’Neill has ruled him out of the game, which takes place just hours before the manager has to finalise his 23-man squad for France.

O’Neill said: “We did some training on Saturday morning and he felt his calf at the end of training, so we’re just taking it on a daily basis.

“He won’t play tomorrow night in the game. I don’t think it’s worth risking that. But he is, as he says, a quick healer so we’ll see how it goes.”

With so little time left before the tournament gets under way – the opening game against Sweden in Paris is two weeks away – any significant damage would make Keane, who has 67 senior international goals to his name, a major doubt.

O’Neill will have to make his decision before 11pm on Tuesday night, the Uefa deadline for squads to be submitted, but asked about the LA Galaxy frontman’s chances of making it, he said: “I couldn’t say at the moment, but I think he’s pretty hopeful.

“First of all, I’ll get a better update when another 24 hours pass. He had an injection this morning, so he wasn’t going to participate in any training today anyway. I’ll see how he is.

“Again, Robbie is a pretty quick healer – he says that himself. He is the captain of the team, we would want him to be there and there’s not much more I can tell you.”

Keane’s injury was not the only concern for O’Neill as he prepared for a game which will give some of the players on the fringes of his thoughts a final chance to force his hand.

Bournemouth midfielder Harry Arter pulled up with a thigh problem towards the end of the session and was due to undergo a scan.

However, Everton’s James McCarthy, who did not train last week because of a thigh problem, was able to work with the physios, although he too will not be risked against Belarus.

O’Neill said: “The reports are he is feeling a wee bit better from a couple of days before. It’s one of those things that we will have to look at on a daily basis – I say on a daily basis, but we don’t really have that many days left.

“I think there is optimism around. I’m hoping that’s the case.”