Protesting players refuse to play having not been paid 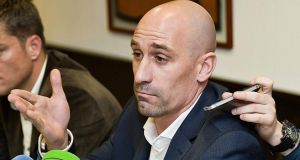 Luis Rubiales, president of the Association of Spanish Footballers (AFE), gestures during a press conference following a meeting with Racing Santander players ahead of their Copa del Rey game against Real Sociedad. Photograph: Pedro Puente Hoyos/EPA

Racing Santander’s Copa del Rey clash with Real Sociedad was suspended on Thursday evening after the home players refused to play, having not been paid for several months.

The Racing players released a joint statement on Monday announcing they would boycott the quarter-final second leg unless president Angel Lavin and his board stepped down.

That did not happen prior to kick-off and, although the home players turned up and completed their warm-up on Thursday, when the first whistle blew it soon became evident there would not be a contest.

Once Sociedad kicked off, the Racing players moved in and stood arm in arm around the centre circle, with substitutes and coaching staff lining up in solidarity on the touchline.

Sociedad passed the ball between themselves in their own half for a while before kicking it out for a throw-in, at which point the referee signalled that the match was suspended.

In the statement on Monday, Racing captain Mario Fernandez said the players had not been paid for a number of months despite promises they would be.

With still no response to that ultimatum throughout the week, Association of Spanish Footballers (AFE) chief Luis Rubiales met with the Racing players and coaching staff in Santander on Thursday, and afterwards he confirmed there had been no change in the team’s stance.

Rubiales told a press conference: “If at 2100 (CET) the Racing board is the same as now, they will not play.

“The squad decided something last Monday which they made public, and they continue thinking exactly the same, that if the current board has not resigned by the time of the game they are not going to play. They have the complete backing of the AFE, as always.”

Rubiales reminded the Racing players at the meeting that “there are rules and their decision not to play could have consequences, but they are strong and united and we have to be together with them”.

The evening’s events at El Sardinero appeared to mean Sociedad – 3-1 winners in the first leg – would advance to a semi-final against Barcelona.

As recently as 2008, Racing finished sixth in the Primera Division standings but in the last two seasons they have suffered back-to-back relegations to drop to the third tier.