Portugal stand up to be counted in absence of Cristiano Ronaldo 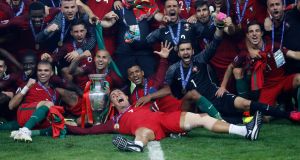 Dare one say it? The key to Portugal’s remarkable triumph over France in last night’s Euro 2016 final was the clear sensation that the winners Portugal actually played like a much better team in the wake of the 25th minute substition of their biggest name, their poster boy galatico, Cristiano Ronaldo.

If one of the intriguing sideshows in this Euro 2016 final was to have been the Ronaldo-Griezman, all Madrid (Real v Aletico) confrontation between Ronaldo and the French hero of the tournament, it did not last long. This much anticipated clash between two players with aspirations to lifting the European Player of the Year award was over after just 25 minutes.

A tackle by Frenchman Dimitri Payet after only eight minutes put an abrupt end to Ronaldo’s dreams of leading his country to Euro success. The tackle might have been a little bit on the robust side but it did not look intentionally violent. However, in the confrontation, Payet crashed into Ronaldo’s left knee.

After hobbling around uncomfortably for another quarter of an hour, during which time he was attended to and then bandaged by the Portughese team doctor, Ronaldo collapsed like a little child whose new tricycle has just broken, right in the centre of the pitch. With tears pouring down his face, the Real Madrid star was stretchered off, receiving a warm ovation in the 26th minute.

And it was then that a curious thing happened. Rather than collapse, Portugal started to play better. Relieved of the obssession of having to quickly get the ball to Ronaldo everytime they moved forward, the Portughese began to play in a more rational, more normal team manner, making the right if sometimes obvious pass rather than the “straight to Ronaldo” one.

On top of that Portugal were helped by the fact that Ronaldo’s substitute, Ricardo Quaresma, played out wide on the right, stretching the French defence and leaving more room for the smooth Portughese passing game down the middle. Then, too, Portugal’s 18-year-old Benfica star, Renato Sanches, stepped up to the plate, assuming a remarkably commanding central midfield role in which his pace and overall vision began to pay off unexpected dividends.

Alongside him, William Carvalho, substitute Joao Moutinho and Joao Mario all became much more influential in a Portugese midfield which had looked in difficulty in the face of the inevitable, aggressive French opening to the match. By the time we got to extra time, it was clear that the resurgent Portugese had got their hosts distinctly worried.

If Ronaldo’s injury turned out to be a blessing in disguise for Portugal, if a major disappointment for him, one could hardly say that the other would-be Player Of The Year, Griezmann hardly fared better. Having started well and having had at least one excellent header just over the bar, following a pass from Payet, he like France itself, faded out of the game. As France comprehensively lost the midfield, the talented Griezmann was left to feed off much reduced rations.

As for Ronaldo, to be fair, it has to be said that he returned to the sidelines to encourage his gallant team mates and to act the role of a true captain. In that sense, at least, he proved himself to be a genuine champion.

At the end of the night, however, you would have to come to the most cliched football conclusion of all time. Namely, football, funny old game that it is, first and foremost is a team game. The galaticos matter, but not as much as a well organised team.