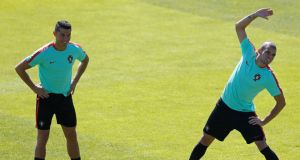 Cristiano Ronaldo and Pepe warm up ahead of Portugal’s training session at Centre National de Rugby in Marcoussis ahead of Sunday’s European Championship final against France in Paris. Photograph: Regis Devignau/Reuters/Livepic

Pepe is set to return to the Portugal starting line-up for the European Championships final against France at the Stade the France on Sunday after taking a full part in the squad’s final training session on Saturday and showing no signs of any problem with the thigh strain that sidelined him for the game against Wales.

“I feel great,” said the 33 year-old Real Madrid defender, “I’m fully fit and can be chosen to play tomorrow.”

Asked about the form of Antoine Griezmann and France’s status as pre-match favourites in the wake of their win over Germany, the player said that he had been impressed with the host nation’s performance in Marseille but that he and his team-mates are confident that they make amends for 2004 when Portugal suffered a surprise defeat on home soil against Greece in the final.

“I think France have players of great quality,” he said. “And together, they make a very strong team. They are all great players with a lot of quality who play for great clubs in Europe and it should be a great match but my team-mates are playing well too and we intend to bring huge joy to all Portuguese people.

“I’ve played against Griezmann several times in Spain,” he continued. “He’s not very tall but he’s very clever at working out where the ball will be. He’s important to the French team but it’s important that we don’t focus too much on one man. We have to beware of the whole French team and we also have to hope that Ronaldo is at his very best because we all know what he can do.

“He is an amazing character. And despite what all of his detractors have said, he plays for the team and he is still scoring for it. “

Pepe has a few critics of his own but when asked about his own potential for “divisiveness” as it was put, he shrugged the issue off, insisting that he is simply committed to the cause.

“I’ve been playing in Real Madrid for (almost) 10 years ,” he said. “It’s a very demanding club. And for Portugal since 2007. I am very demanding of myself. I hate losing.

“I have played at World Cups and European Championships before and I always give everything for the team. I play at the highest level. That’s what enables me to play in finals and other big games and to win trophies.”

His coach Fernando Santos insisted that France are favourites to win the game.

“They are playing at home and have a lot of players at the biggest clubs in the greatest leagues in the world. So it’s normal. But I don’t think they will win,” he said. “I think Portugal will win tomorrow.”