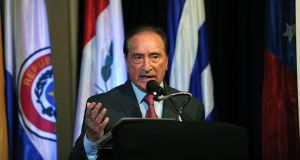 Fifa could face another crisis after the Panama Papers revealed an apparent conflict of interest at the heart of the ethics committee supposed to clean it up.

The documents – part of a huge data leak from the law firm Mossack Fonseca, which helps clients set up companies in offshore tax regimes – show links between Juan Pedro Damiani, a Uruguayan lawyer and long-serving member of the ethics committee, and Eugenio Figueredo, a former senior Fifa vice-president recently accused of corruption, are far more extensive than previously known.

The files could threaten to undermine the credibility of the ethics committee, which is central to attempts to show Fifa is willing to reform after decades of corruption allegations.

Fifa’s ethics committee immediately launched an inquiry, insisting it did not know about Damiani’s business links to Figueredo before the former informed its chair, the German judge Hans-Joachim Eckert, via email on 18 March after being confronted by the Guardian and its partners in the Panama Papers project.

Eckert, who chairs the adjudicatory chamber of the committee on which Damiani sits, passed the case to the investigatory arm. In his email to Eckert, Damiani said he had maintained a professional relationship with Figueredo since 2007 – although documents seen by the Guardian suggest it may go back even further.

According to the Panama Papers, Damiani and his law firm act for more than 200 offshore companies registered with Mossack Fonseca, the Panamanian legal firm whose database has been leaked.

There is nothing unlawful in acting for or setting up offshore companies, but the lack of transparency is a cause for concern.

The files reveal several of these companies are connected to Figueredo – who was arrested in Zurich last year and accused of involvement in a $110m (£77m) bribery scam – and that the two men appear to have had ties dating back to 2002.

The documents also show that Damiani arranged the formation of a Panamanian company through which Figueredo, who is also Uruguayan, was given special powers to make loans to sporting institutions.

The professional links between them continued until at least February 2015, when Damiani asked Mossack Fonseca to give special powers to Figueredo’s wife over a company called Gilson Overseas SA, which is now under investigation. Less than four months after Mossack Fonseca carried out the work, Figueredo was provisionally banned by the ethics committee.

The documents also reveal that in June 2015, a month after Figueredo’s arrest, the former Fifa vice-president was still the “beneficial owner” – the real owner of a company, whose name may not appear on the shareholder register – of five companies. He was also still named as an official of two other companies. All seven were represented by Damiani’s law firm. Five out of the seven remained active at the end of 2015, the Panama Papers show.

The revelations will not only call into question Damiani’s position on the committee. He will also have to explain how he came to represent the offshore financial interests of an official who has now been accused of bribery.

The disclosures may damage the credibility of the ethics committee, which has fought the perception that it is being used for political ends by Fifa’s disgraced former president Sepp Blatter and others.

Damiani, who has served on the committee since its formation in 2003, and Figueredo are two of the biggest names in South American football. As well as being a lawyer, Damiani is president of one of the country’s biggest football teams, Peñarol. He has handled a string of bans, including Blatter’s suspension. Figueredo, 84, a former head of Uruguay’s football association and a key figure in South American football for decades, was a Fifa vice-president in 2013 and 2014. Figueredo’s time as head of Uruguay’s FA was tainted by claims of cronyism.

He was arrested in a swoop on Zurich’s five-star Baur au Lac hotel last May after the US Department of Justice outlined corruption charges including money laundering, racketeering and tax evasion. He is accused of being involved in a scheme to solicit $110m in bribes from broadcasting executives in exchange for a suite of rights to the Copa America – the South American version of the European Championships – and a centenary edition of the tournament to be played in 2016. Prosecutors say Figueredo was in line for a $3m payment as a result of the scheme.

In addition to the US accusations, Figueredo pleaded guilty this year to fraud and money laundering in a separate case in Uruguay.

The US indictment alleged one of the three sports rights companies involved was led by the sports marketing executives Hugo Jinkis and his son Mariano. The files show Damiani once represented their offshore vehicle Cross Trading, registered in the tiny island country of Niue. In June 2015, as the scale of corruption within Fifa began to emerge, Mossack Fonseca resigned as the registered agents of Cross Trading.

It is understood from Fifa sources that Damiani did not mention any links to Cross Trading in his email to the ethics committee last month.

Damiani told the Guardian he was not authorised to comment on the case while Figueredo was being investigated in Uruguay. A spokesman for one of his law firms said Damiani himself had first submitted a report that led to action being taken against Figueredo by the Uruguayan authorities. He also said Damiani had kept the Fifa ethics committee informed and reported the case to it in January 2014. Asked about links that appeared to continue beyond that date, Damiani refused to comment further.

“To sum up, as an organisation, but also on a personal level and a professional level as president of Peñarol, Mr Damiani took all the relevant measures to bring clarity to these incidents, even though following those steps was not a legal requirement on his part,” said the spokesman. He said Damiani did not maintain any professional or commercial links with anyone under criminal investigation in the US over the Fifa scandal.

The world’s best footballer, Lionel Messi, is one of the high-profile people who crop up in the Panama Papers. Records show he and his father, Jorge Horacio, were the ultimate beneficial owners of a company called Mega Star Enterprises, registered by Mossack Fonseca in February 2012. There is nothing unlawful about having an offshore company.

Both men are currently on trial in Spain for tax evasion. That case centres on the alleged simulated transfer of image rights into front companies with no business activity in Uruguay and Belize. Both men have denied the accusations and instead blamed a former financial adviser. Jorge Messi made a voluntary corrective payment of €5m in August 2013. Mega Star enterprises is not mentioned in the case.

The Guardian contacted Messi about Mega Star 12 days ago. He has not responded. His father declined to comment to the International Consortium of Investigative Journalists.