Martin O’Neill relieved to see Aiden McGeady back in action 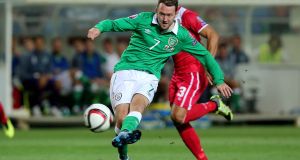 Aiden McGeady: “He can take players on and he can deliver good ball and can beat players with ease . . . not everybody is blessed with that,” says Martin O’Neill. Photo: Donall Farmer/Inpho

As he waits on word about this week’s bangs and bruises to the likes of John O’Shea, Harry Arter and Shane Long, Martin O’Neill has expressed some relief that Aiden McGeady is getting to play his way back to full fitness at Sheffield Wednesday.

The 29-year-old is a firm favourite of the Republic of Ireland manager who handed him his senior club debut when the pair were at Celtic more than a decade ago. Despite that, however, the midfielder didn’t start a qualifying game after the game against Poland a year ago with his last appearance of the campaign, in the first leg of the playoffs, was limited to just four minutes in the Bosnian fog.

On the club front, though, things are improving. Having played just 45 minutes in the League Cup for Everton back in August, he has featured four times for Wednesday since moving just over a month ago and as his sharpness returns, he has the potential to be a major player in their push for promotion.

“He’s started a number of games and hasn’t completed the matches but in terms of fitness (he is making progress). I watched him the other day and he got an hour in the game. He made the effort to get out because I think he wants to be involved in the squad.

“He’s one of those players, if he doesn’t mind me saying, that needs to be sharp to be at his very best. He can take players on and he can deliver good ball and can beat players with ease and those type of things; not everybody is blessed with that.

“That natural talent has to be supplemented with extremely hard work and the ability to keep yourself in absolutely top condition. When you’re not playing regularly there’s a tendency for that to drop off.

“And now he’s gone out there to Sheffield Wednesday, he’ll feel part of a cause rather than playing under-21 games for Everton. He’ll feel at the end of these matches that he’s actually involved in something and that’s good. All of those things will help the mentality. I think in the physical sense this can be a wonderful benefit to him.”

The upbeat assessment is in stark contrast to his take on Darron Gibson who failed to move in the window despite apparently having had options and who now has just three weeks in which to secure an emergency loan move away from a club where he rarely features.

“Well, I think that first of all you have to have a desire to go and play, remember, the final decision may not be with the players, it could be with the manager and the club and, with Everton going strongly, if you happen to be mentioning Darron’s case. I’ll find that out myself as I will give him a call, but the more games you are playing competitively between now and the end of May the better chance you will have.”

Gibson risks losing his place on the plane to a player like Arter whose club form has been impressive even if he lacks the international experience of the ex- Manchester United man.

Arter, though, is one of the players to have picked up injuries over the past week – in his case it is an Achilles problem – and O’Neill acknowledges that as the tournament gets closer, he worries more about the fitness of the players he will have to choose from.

“Very much so,” he says. “John O’Shea, Arter, Long; every injury that is reported to you, you’re wondering ‘could this be it?’ In terms of time to recover it’s getting less and less so it’s a major concern.”

Stoke City manager Mark Hughes said yesterday that he hopes the 39-year-old, who was back in Qatar last week for further attention to the knee injury he sustained playing against Germany in October, will be available to play by the end of the season. But he will miss the opportunity to go out on loan and so even if he is fit by May he is unlikely to have played any competitive football in comfortably more than six months.

“Shay has got to try to get himself fit,” says O’Neill before suggesting that he will give the Donegalman every chance.

Ultimately, O’Neill insists, he won’t shy away from making the calls he has to in May.

“That’s the name of the game. It won’t be just as easy as at club level . .. You didn’t mind doing that. And actually at club level there were some players I enjoyed leaving out of the squad. But I can’t say it will be the same here for the Republic boys who have come here with big hearts, wanting to play.

“Eventually when the 23 is announced, there will be one or two where it will be tough to leave them out.”

1 French new wave stay on course for Grand Slam
2 England v Ireland preview: Ireland’s revival to face its sternest test
3 Keeping Donegal on the road to success a costly business
4 Six Nations: Ireland v England all you need to know guide
5 ‘Manchester United are lucky to have you’: Klopp responds to Donegal schoolboy’s letter
Real news has value SUBSCRIBE
Crossword Get access to over 6,000 interactive crosswords